Palace: Drop in PH corruption rating a matter of perception 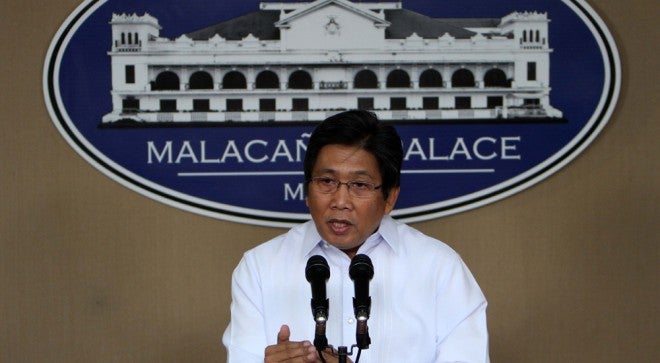 The Philippines tied with Mexico and Armenia in 95th place among 168 countries worldwide. The country was ranked 85th in 2014.

The CPI scores, which range from a scale of 0, which is perceived to be highly corrupt, to 100, which means very clean, are based on “expert opinions of public sector corruption.”

“The reality is that for the past five years, the Philippine government has instituted major reforms that have strengthened the governance structure of our country,” he said.

Coloma, head of the Presidential Communications Operations Office (PCOO), also reported that the Aquino administration had initiated the heightened public accountability of government agencies through the mandatory requirement that all government agencies must maintain websites accessible to the public.

“These websites contain vital information on major decisions made by various departments and agencies of the government, major procurement transactions, as well as how they have spent their budget,” he said.

In a statement, the PCOO chief expressed confidence that “the reform programs that have been instituted by the government are talking root and these gains will be sustained.”

“Perceptions are based on various things, but we are more concerned about sustaining the reality of a well-established framework for good governance,” he added.

Quezon said the Senate’s long-running exposé on Binay’s alleged rigged bidding of projects in Makati City when he was its mayor, ill-gotten wealth and use of dummies were among the reasons the Philippines slipped in CPI.

In a radio interview, Quezon said that since the corruption index was based largely on perception, respondents of the Transparency International survey would assess the Philippines based on information they were getting from media and other sources during the last 24 months.

“The harsh reality is if what the foreigners see and their sources show that there is really (corruption) … when members of the legislature are investigating corruption, there is your answer. In other words, there is an effect on the perception of other people why this major scandal is being discussed,” he said.

Quezon based his views on comments made by business executive Guillermo “Bill” Luz, the cochair of the National Competitiveness Council.

Luz explained that the Transparency International survey was made “against a political landscape tainted by corruption scandals not entirely linked to the administration.”

He cited as among the issues that affected perceptions of the country the extensive and widely covered Senate blue ribbon subcommittee probe of Binay and his son, former Makati Mayor Junjun Binay, for alleged corruption schemes in Makati City Hall, as well as court hearings on the constitutionality of the Disbursement Acceleration Program (DAP).

The Supreme Court has declared the DAP unconstitutional.

Transparency International observed that two-thirds of the 168 nations scored below 50, noting that no country in the world is completely corruption-free.

For the second year, Denmark took the top spot in the CPI, scoring a high 91. The European country was followed by Finland, Sweden, New Zealand, the Netherlands, Norway, Switzerland, Singapore, Canada, Germany, Luxembourg and the United Kingdom.

On the other hand, North Korea and Somalia tied at the bottom of the list, both scoring 8.