Ombudsman: So many in gov’t are corrupt | Inquirer News

Ombudsman: So many in gov’t are corrupt 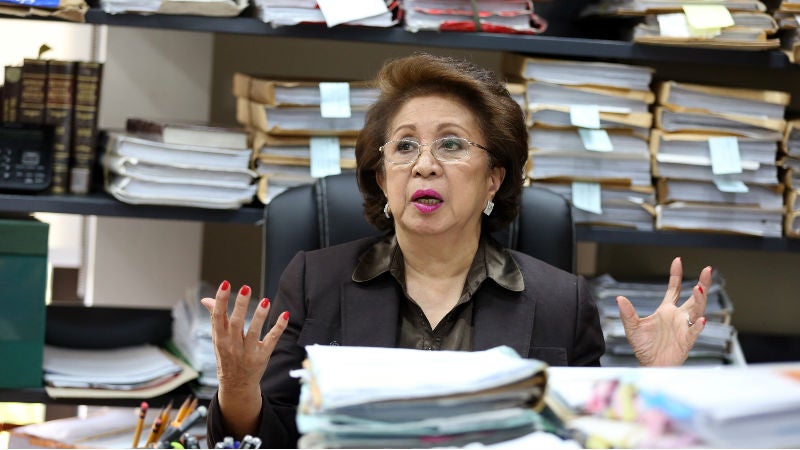 A “SUPER” number of corrupt government officials can still be found throughout the bureaucracy, according to Ombudsman Conchita Carpio Morales, who is urging voters to choose in the May elections candidates with integrity if they want a clean government.

Corruption remains prevalent in the government, Morales said, noting that her office had received thousands of complaints about graft and corrupt practices and other administrative violations.

Most of the new cases filed last year involved local officials, a total of 1,092, while police officers accounted for more than 600 cases.

Other officials who faced investigation by the Ombudsman include those from the military and the education, finance, natural resources, justice and agriculture departments, as well as state universities and colleges, and the fire protection and jail management bureaus.

Morales’ statement came before the ranking of the Philippines in Transparency International’s Corruption Perceptions Index (CPI) for 2015 dropped 10 notches from 2014.

The Philippine CPI ranking slid to 95th from 85th. The higher the ranking, the more corrupt a country is perceived to be.

The country’s public sector got a score of 35 from experts and institutions that Transparency International (TI) had tapped. Countries that obtained a score of less than 50 have “serious corruption problem,” according to TI, which assessed 168 countries in the 2015 index.

The Ombudsman urged Filipino voters to choose candidates with unblemished integrity in the May general elections.

“My only appeal is that people should vote [for] people with integrity [in the] local and national level. It’s not enough to be smart and competent. You (candidate) should have integrity. That’s my appeal,” Morales told the Inquirer on Jan. 25.

Without referring to a particular candidate, the Ombudsman made the call when asked if she had any concern about the coming changing of the guard in June, the end of the term of President Aquino, who put the anticorruption campaign at the core of his administration.

“I have no concerns at all,” Morales said, adding that her office is an independent constitutional body. She will serve as Ombudsman until 2018.

Morales said candidates, whether vying for local or national posts, should present a clear anticorruption platform.

In the presidential race, one candidate is facing corruption and plunder charges but has recovered from last year’s record-low ratings. Another candidate vows not to steal.

Asked if she had made her choice, Morales said she had yet to firm up her list. “I’m supposed to be apolitical. I will decide at the eleventh hour,” she said.

Asked how she would rate the administration’s performance in battling corruption, the Ombudsman said President Aquino was sincere in the campaign. “Well, if you read from the papers, the President is really pursuing this anticorruption campaign in earnest,” she said.

Morales’ office is independent from Malacañang, and she said she did “not get orders from the President.” But if reporters were to be believed, she said: “…The President is really serious in pushing the anticorruption program.”

The Office of the Ombudsman has a workload of 11,056 cases, including 8,715 pending cases from previous years and 2,341 cases filed in the first half of 2015, according to data on its official website.

Of the total—27 percent or 2,940 cases—have been resolved—either dismissed, forwarded to the courts or resulted in administrative penalties.

“I’d like to believe that there has been an increase in confidence and trust in the Office of the Ombudsman. And, on account of that, people think we can solve all their problems,” Morales said.