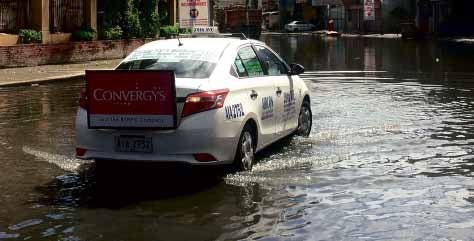 A TAXI cab makes like an amphibian vehicle as it wades out into flooded Maysilo Circle in Mandaluyong City. JOVIC YEE

OVER the last several months, the eatery on Maysilo Circle in Mandaluyong City where Gloria Fuentes works has seen fewer customers coming in for a meal.

According to Fuentes, the decline has nothing to do with their food or service but with the foul-smelling, stagnant water surrounding the open-air, nipa hut-inspired establishment.

“They are discouraged from eating here because it reeks. It ruins their appetite,” she told the Inquirer Sunday.

Fuentes added that as a result, the eatery’s earnings have plummeted over the last months from around P8,000 a day to barely P1,000.

The stagnant water surrounding portions of Maysilo Circle, Boni Avenue and adjacent streets have been blamed on the Department of Public Works and Highways’ (DPWH) ongoing drainage improvement project which started as early as January 2013.

Another businessman, car shop owner Angel, lamented that when the DPWH project began, he was forced to temporarily close up shop due to road closures. But when the streets reopened, he found out that he still could not resume operations since car owners could not see the point of having their vehicles washed only to wade out into the flooded surrounding streets.

Angel told the Inquirer that since suspending the operations of his decade-old shop in 2013, he has lost around P1,500 in earnings a day. He noted that three other businesses near his shop had since closed because of the inconvenience brought about by the stagnant water.

The growing number of complaints from businessmen, residents and motorists passing through the flooded areas prompted Mandaluyong Mayor Benhur Abalos last week to write to Public Works Secretary Rogelio Singson to express his dismay over the “slow moving pace” of the DPWH project.

“While the project is owned and operated by your department, [the] city government continues to be blamed and criticized for [it],” Abalos said in his letter received by Singson’s office on Friday.

He expressed concern that flooding in the affected areas has grown “worse” each day, with the roads becoming “useless” and impassable. He urged Singson to come up with a “detailed plan” of the project, indicating its progress and expected completion date, which he could show to residents.

“This will somehow equip us in addressing certain issues and would not keep us groping for answers in the dark,” Abalos said.

On the DPWH website, improvement works on San Francisco Street near Maysilo Circle are set to be finished by May 30 this year—with around 54 percent of the project already completed as of Dec. 31, 2015.

For Angel, all he wants now is for the flooding to recede after the DPWH project has been completed so that his car wash shop could resume normal operations.