What it takes to be an elite SAF trooper 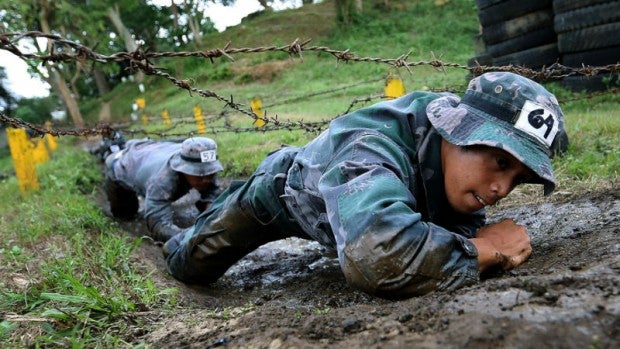 “My job is not for the weak or fainthearted.”

Che Gurrobat-Pascual, 32, remembers those words of her cousin, Max Jim Tria, describing his job as an officer in the Philippine National Police Special Action Force (SAF) at a family get-together in Catanduanes province two years ago.

Tria sported a thick beard and disheveled hair, a far cry from the scrawny and goofy boy Pascual had seen growing up in the island province in Bicol.

The change made Pascual ask what Tria did for a living.

“He didn’t elaborate… [but] it was then that I started to realize how adventurous his life must be,” Pascual, a news producer, said in an interview with the Inquirer in Quezon City.

Two years after her last conversation with him, Pascual understood what her cousin meant: Tria, 27, was one of the 44 SAF commandos killed in a gun battle with Moro rebels in Mamasapano, Maguindanao province, on Jan. 25, 2015, after a covert operation to take down Malaysian terrorist Zulkifli bin Hir, alias Marwan, backfired.

The SAF is the counterterrorism unit of the PNP. It is an elite force whose members are trained in both law enforcement and military operations.

In short, “[the SAF] is like the police and the military combined,” Senior Insp. Jayson Baldos, spokesperson for the SAF, said in an interview at the unit’s headquarters in Camp Bagong Diwa in Taguig City.

Besides counterterrorism operations, the SAF also handles  anti-insurgency and hostage rescue operations. The job also includes search and rescue operations during disasters and civil disturbance management. SAF officers are also tapped to provide security to VIPs, including the President of the Philippines.

Of all police units, only the SAF trains its officers as commandos. Baldos said the training, at the unit’s school in Fort Santo Domingo in Laguna province, was as rigorous as the Philippine Army Scout Rangers course.

Like all rookie police applicants, aspiring SAF officers first have to meet the general requirements and documentary requirements for Police Officer 1 (PO1) then undergo the six-month basic public safety course at the National Police Training Institute in Laguna. From there they move on to field training, which takes another six months, said  Supt. Cyril Jasmin, the SAF commandant who also heads the SAF training school.

The field training program is like the on-the-job training program for all rookie police, where they are distributed to police stations to get a feel of the daily police grind, ranging from investigation and intelligence work to traffic and patrolling, Baldos said.

Then comes the training unique to the SAF—the commando course, which takes another six months, although in practice, it could take up to two years, Baldos said.

For the duration of the commando course, the trainees live in tarpaulin tents pitched on humid, dusty fields in Fort Santo Domingo. This “tent city” serves as their barracks as they undergo daily physical exercises interspersed with classroom instructions.

“You will never feel comfort there,” Baldos said, recalling that his days in training usually began at 4 a.m. and ended at 10 p.m.

When the Inquirer visited the training camp, the trainees demonstrated their skills at various rope and obstacle courses.

The firing range was busy, filled with students training in marksmanship, shooting pistols and rifles at legal-size paper targets set at 5 to 200 meters away.

A regular sight at the camp would be students on “load runs,” in which they jog around a 1.2-kilometer oval carrying rucksacks filled with 18 kilos of sand on their backs.

Students are subjected to this  exercise at least thrice a day—training for future missions in which they have to lug around weapons, ammunition, rations and medical equipment, Jasmin said.

The training at the camp has five phases, with subjects ranging from first aid, jungle, mountaineering and navigation techniques to communications, weapons efficiency, combat skills, air to ground support and marksmanship.

Eventually, the students will be sent out of the camp for field training. But the final phase, the test mission, sees the students deployed on real operations for at least a month.

If they are embroiled in an encounter with enemy forces during the test mission, they will automatically be recommended for graduation, Jasmin said.

Only the really tough survive boot camp. For instance, the class graduating this summer started  with 103 students. Now only 92 are left.

Most dropouts are due to medical reasons, Jasmin said.

After graduation the troopers receive their reward: the black beret with the winged sword logo of the SAF.

The road to becoming “elite” police officers doesn’t end there, though. The SAF has its version of master’s studies.

After commando school, the troopers have the option to take further “specialized” courses: “Sureshock” or the urban counterrevolutionary warfare course, a requirement for counterterrorism units and crucial training for hostage situations; explosives and ordnance disposal; K9; airborne, for air operations; and the maritime tactical operation course (MTOC).

According to Baldos, the MTOC is exclusive schooling for the “elite of the elite” SAF troopers, the Seaborne. To qualify for the MTOC, troopers should be “Sureshock-qualified, and airborne-qualified.”

The commandos are then distributed to nine battalions stationed across the country, including the rapid deployment battalion, the force support battalion, and the air unit. Each battalion has its own eligibility test.

“Seaborne” is the monicker for the 84th Special Action Company (SAC)—the strike force for “Oplan Exodus” deployed to get Marwan. Of the 44 SAF commandos killed in the operation, nine were from Seaborne.

Tria, the lone commando from the 54th SAC in Oplan Exodus, had been tapped as a sniper for the mission.

“I have no doubt he died fighting. He wouldn’t be taken alive,” Pascual said, pride ringing in her voice.

Tria was reported to have died with a grenade in each hand. “The enemy really wouldn’t have dared approach [Tria],” Baldos said.

Citing autopsy reports made available to the family, Pascual said Tria did not appear to have been shot dead, as he was hit in his extremities. He most likely died of blood loss.

Tria died with the rank of senior inspector. After a posthumous promotion for the SAF 44, he became a chief inspector— the same rank as his father, a police officer in Catanduanes, Pascual said.

Surprisingly, after Mamasapano, the SAF saw an increase in applicants, mostly from Mindanao.

In July and October 2015, around 500 SAF applicants took their oaths as PO1s. “Most of them were from Mindanao,” Baldos said.

Those policemen are now undergoing the basic stages of training. Baldos could not say if they were inspired by the SAF 44, but he said: “They must have a sense of volunteerism. [You will apply with the SAF only] if you are willing to risk personal comfort and security to serve the country. The risks are higher than for [an ordinary] policeman.”

Mamasapano debacle: All about money