Saving ‘lolo’s’ work at The Met 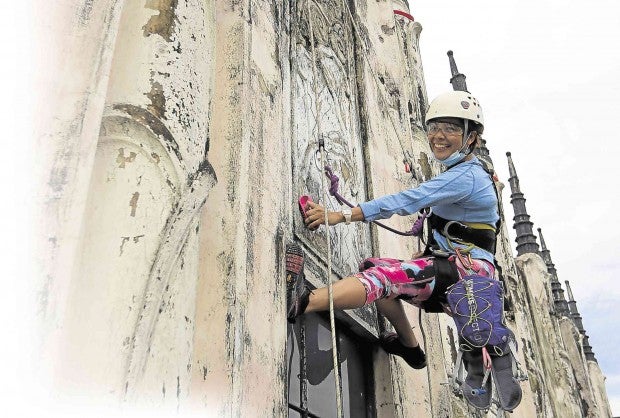 FOR GRANDPA, FOR GRAND DAME. Christine De Leon reaches a personal high cleaning up The Met, known in its heyday as the Grand Dame of Philippine Theater. RAFFY LERMA

Of the 60 people who showed up on Saturday for another cleanup drive at the Metropolitan Theater, one had a more personal connection with the heritage building which is being prepped for restoration.

Christine de Leon proudly did her part in saving The Met, whose precast ornaments were created by her grandfather, artisan Inocencio “IG” de Leon, in 1931.

For the 35-year-old De Leon, a licensed interior designer, just seeing and touching “my lolo’s creations” was motivation enough. “[They] remind me of his hard work. He also has other works in Manila—at the National Museum, the Post Office.”

De Leon, also a rock climber, was one of the volunteers who scaled The Met’s walls on a rappel line, scrubbing off decades of dirt as she went down. “It’s wonderful to see all these people trying to help,” she said, as other volunteers from Greenpeace also used their rappelling skills to clean the facade.

“This is meaningful to me because we have so many landmarks going to waste,” said De Leon, whose family still creates precast ornaments under the company OG de Leon Pre-Cast.

The company plans to set up a meeting with architect Gerard Lico, who is in charge of The Met’s restoration. “We’re trying to see what support we can give—and to show everyone that ‘hey, we’re still here, we’re still alive,’” said De Leon.

According to Lico, The Met still needs six more rounds of cleanup by volunteers to get rid of the dust, grime and graffiti, before the National Commission for Culture and the Arts (NCCA) calls in professional cleaners to dispose of garbage and hazardous wastes inside the building. The first cleanup was held on Dec. 12 last year, involving 250 participants from NCCA and various colleges and universities.

“Cleanup is the prerequisite to the more scientific aspect of restoration,” he explained. “We will use the latest technology [such as] three-dimensional scanning and ground-penetrating radar, to bring back The Met and to make it structurally stable and sound.”

He estimated that the restoration will take five years (longer than the earlier projection of two to three years). “I want this to be the textbook example of how conservation ought to be in the Philippines. It’s owned by the NCCA, the foremost agency implementing heritage laws, so this should be the best example.”

Based on feedback gathered from focus group discussions held since September, Lico said the NCCA hoped to reopen The Met as a “mall of culture and the arts… a one-stop-shop of museums, galleries, conference spaces, lecture halls and atelier of artists in residence.”

He added that despite the city government’s persistence in reclaiming ownership of The Met, the NCCA is willing to work with local officials on how to best use the complex. “We cannot antagonize the City of Manila. We need each other.”

“But as to the ownership, let’s follow the court ruling—the Supreme Court upheld that GSIS (Government Service Insurance System) is the true owner of [The Met]. And, second, under the Heritage Law, when you sell a cultural property, first right of refusal is with NCCA. But we had the money [to buy it],” said Lico.

“If you look at The Met, it’s in a strategic place. It’s near the National Museum and Intramuros. So it will become part of a cultural network in Manila.”