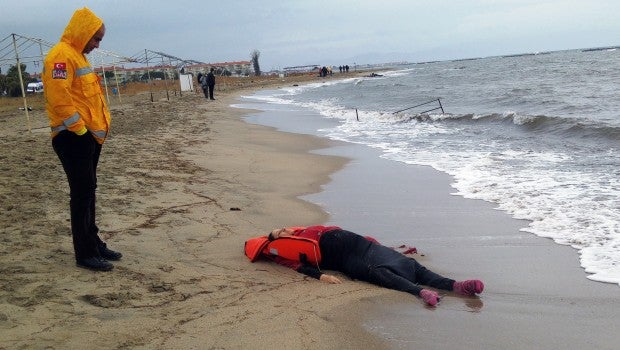 A Turkish rescue worker looks at the body of a migrant lying on the beach in Ayvalik, Turkey, on Jan. 5. A Turkish media report says the bodies of seven more migrants have washed up on a shore in Turkey in a second migrant tragedy at sea in one day. AP

ANKARA, Turkey—Turkey’s state-run news agency says at least 33 people, including five children, have drowned in the Aegean Sea after their Greece-bound boat capsized off the Turkish coast.

Anadolu Agency says coast guards rescued 75 others from the sea Saturday near the resort of Ayvacik en route to the Greek island of Lesbos.

The agency has identified the survivors as natives of Afghanistan, Syria and Myanmar.

The International Organization for Migration says 218 people have died this year while trying to cross by sea from Turkey to Greece.

Turkey is hosting an estimated 2.5 million refugees from Syria.

In November, Turkey agreed to fight smuggling networks and stem the flow of migrants into Europe. In return, the EU has pledged 3 billion euros ($3.25 billion) to help improve the refugees’ conditions.