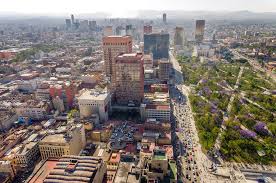 MEXICO CITY, Mexico—Mexico’s sprawling capital changed its official name on Friday as it launched steps to become virtually like a federal state.

For the past two centuries, the city has been known as “DF” from its official name of Mexico Distrito Federal, or Federal District.

But now the city of nearly nine million will be known as Ciudad de Mexico, or CDMX.

That is the Spanish version of what the city is already called by English speakers: Mexico City.

Just like the US capital of Washington,  Mexico City is distinct from the various states that make up the rest of the country, and it is closely controlled by the federal government which is based there.

Under its new status it will acquire some of the same functions as Mexico’s 31 regular states, with a constitution and congress holding legislative powers over public finance and security.

It will also gain access to large sums of federal funding. Its mayor will become like a state governor in all but name.

The transformation began on Friday when President Enrique Pena Nieto signed the reform into force.

The process will be officially completed next year when the city’s new constitution is due to be approved.

The federal government’s influence over the leadership of DF has been a source of controversy among city politicians.

Pena Nieto’s rivals complain his allies will hold undue sway over the assembly that is due to start drawing up the new Mexico City constitution this year.