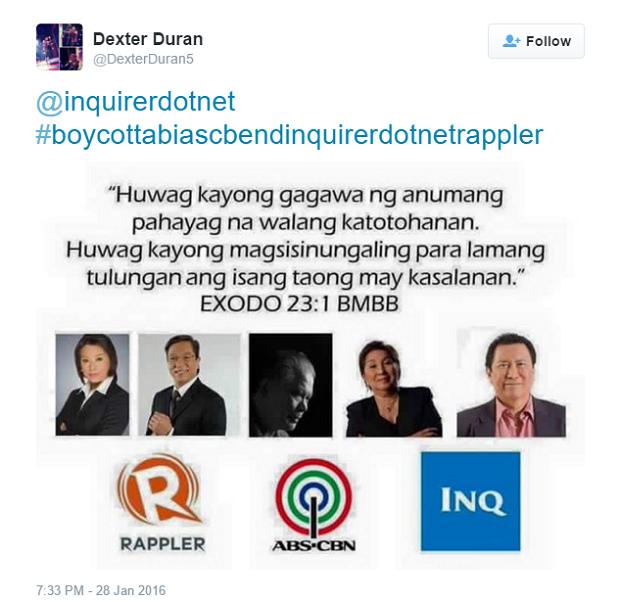 (Editor’s note, revised and updated as of January 31, 1:30 am: The original version carried the source’s photo alluded to in the second-to-the-last paragraph; as of late Saturday, January 30, we learned that the man in the photo was in fact misidentified by the source. We apologize for this mistake, and to the person whose name was inadvertently used. We remove the photo as a consequence. However, we stand by the rest of the story — including the existence of the organized calls for boycott as well as the fact that INC spokesperson Erwil Zabala offered a denial on the record.)

Amid the controversies rocking the influential religious sect, did officials of the Iglesia ni Cristo (INC) order its members to boycott certain local news organizations?

In a Facebook post on Jan. 26, a certain Israel Nono Ponce said “Templo Central” directed them not to watch any program of broadcast giant ABS-CBN for supposedly tarnishing INC’s image through its news reports.

“Lumabas na po ang tagubilin mula sa Templo Central na huwag ng manunood ng KAHIT ANONG PROGRAMA ng ABS-CBN News, sapagkat ang station na ito ang isa sa sumisira sa Pangalan ng Iglesia, pinararatangan ng mga pamunuan ng ABS-CBN ng masama ang kabuoan at kaisahan ng Iglesia (The advisory has come from the Templo Central not to watch any programs of ABS-CBN News because this station is among those that tarnishes the name of the Iglesia, the management of ABS-CBN is charging that the entirety and the unity of the Iglesia is evil),” he added.

Ponce’s viral post was also accompanied by a photo of ABS-CBN’s logo, with a verse on it that read: “Do not spread false reports. Do not help a guilty person by being a malicious witness.” 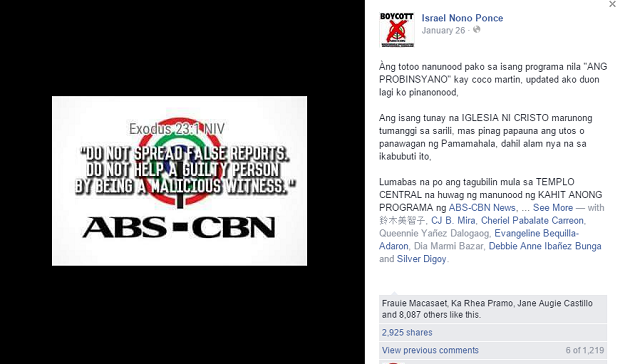 In a separate article at philippinepride.com, a certain Lennie Lazaro said her sister, a deaconess in the locale of San Pablo City, confirmed the order to boycott ABS-CBN News supposedly given after a regular worship service.

“She said members who will be caught watching ABS-CBN will suffer a disciplinary action,” Lazaro wrote.

But in a phone interview, INC spokesperson Edwil Zabala denied the circulating reports, noting that no written directive was issued nor read by the church leadership and its ministers.

However, Zabala said he “personally understands” the sentiments of INC members posting such remarks on social media.

A photo provided by a source to INQUIRER.net also showed a supposedly active INC minister wearing a white shirt imprinted with a “BOYCOTT ABS-CBN” design.

The viral posts of alleged boycott orders came after former INC member Lowell Menorca testified before the Court of Appeals regarding the writs of habeas corpus and amparo on his alleged abduction last year. CDG/RC

Iglesia ni Cristo lawyer: Threat to Menorca ‘all in his mind’