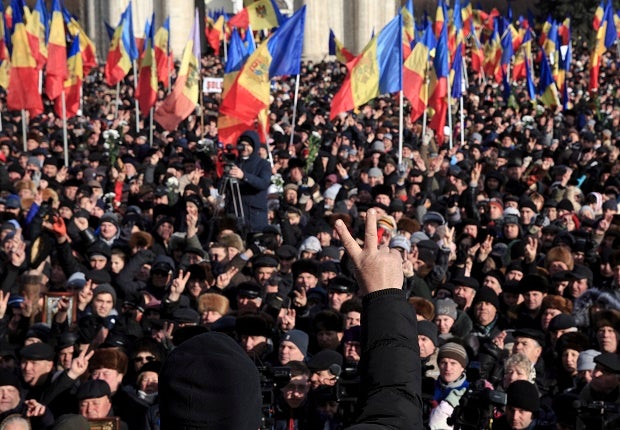 A man flashes a victory sign as protesters shout slogans during a large protest in Chisinau, Moldova, Sunday, Jan. 24, 2016. More than 15,000 people gathered to protest against the government, demanding early elections in the impoverished East European nation, an action that comes after demonstrators stormed Parliament last week as lawmakers approved a new pro-European government. AP Photo

CHISINAU, Moldova—Protesters in tiny ex-Soviet Moldova on Thursday pondered their next move after the authorities snubbed a deadline to call early elections in the latest twist in the country’s protracted political crisis.

Demonstrators—including both pro-European and pro-Russian groups—issued a Thursday ultimatum for parliament to be dissolved after ratcheting up street protests against rampant corruption among the impoverished state’s ruling elite.

But the authorities blanked the demands from the protesters, insisting that a new government formed last week would remain in power.

Pro-EU protest leader Andrei Nastase told AFP that the disparate opposition groups would meet Friday morning in the capital Chisinau to agree on their next step.

“Despite the fatigue of protesters, there is no other option than continuing the protests,” Nastase said, warning of possible “more radical measures.”

Moldova has been locked in political crisis since a $1-billion (925-million-euro) corruption scandal erupted early last year, triggering mass demonstrations and the arrest of former premier Vlad Filat in October.

Protesters have issued earlier ultimatums for new elections during the months of protests and briefly blocked the roads in Chisinau, but achieved no real breakthrough.

“It would be naive to expect that this current ultimatum, which is just the latest of its kind, would really lead to a result,” Moldovan political commentator Victor Ciobanu told AFP.

Wedged between Ukraine and Romania, Moldova is often seen in terms of a tug-of-war between Moscow and the West, especially after it inked an historic EU association agreement in 2014 despite bitter opposition from former master Russia.

But the current protests have seen both nominally pro-Western and pro-Russian forces from the right and left temporarily put aside their differences to challenge a ruling elite they accuse of using pro-European rhetoric to cover up widespread graft.