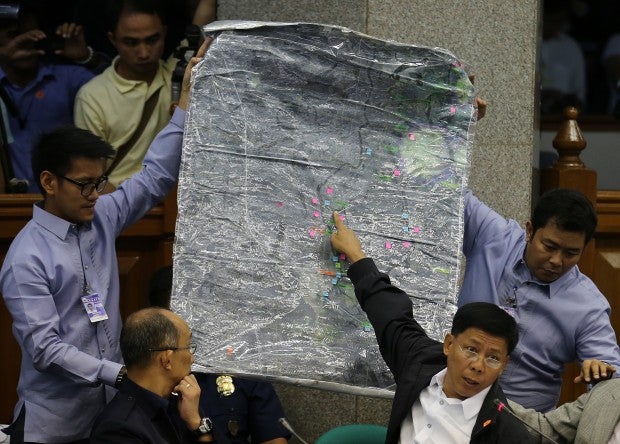 The Armed Forces of the Philippines lashed out against former Special Action Force chief Getulio Napeñas at the reopening of the investigation of the Mamasapano debacle on Wednesday, something that seemed they had long wanted to do but were only holding back.

Napeñas headed the elite police unit when 44 of his men were killed in a botched operation in Mamasapano, Maguindanao in January last year. He was immediately sacked as the SAF chief after the incident and retired from service last July.

Catapang, who was then AFP chief at the time of the incident, said they did not want to be misinterpreted for blaming the PNP as a whole, so they pulled their punches.

“Now that he is retired and out of the service, we can now zero in on all his tactical lapses without seriously affecting the image of the PNP,” he said.

The AFP’s presentation at the Senate hearing essentially blamed Napeñas for the fiasco.

“In the process, he failed to provide or exercise combat leadership and commandership to his troops and when everything was said and done  — blamed everyone, including the President and the AFP for his failures,”  the former military operations chief, Maj. Gen. Angelito de Leon, said in the briefing.

The military was kept in the dark about the high-risk mission that targeted Malaysian terrorist Zulkifli bin Hir alias Marwan and were only told when the operation was already ongoing.

The lack of crucial details, such as the location of friendly and enemy forces and target description, caused the delay of military reinforcements for the besieged SAF troopers.

Catapang himself was grilled by Senator Juan Ponce Enrile at the hearing for not deploying troops and assets right away.

At the hearing, Catapang explained that they were following the chain of command and such decisions of deployment are left to tactical commanders.

“[I was] a bit annoyed because he was picturing me as a stupid chief of staff,” the former AFP chief said, but added that he was grateful to the senator for the reopening of the investigation.

“We can now put the unfortunate incident to rest. We can now move on and say the truth has been uncovered,” Catapang said.

The former military chief also said he believed that the relationship between the AFP and PNP had been restored after a rift caused by the debacle.

A military general privy to the issue but asked not to be named, told INQUIRER.net that their ties with the PNP are doing well.

He explained that the military leadership decided to go on “offensive” because they got fed up with Napeñas.

He said AFP chief Gen. Hernando Iriberri got irked with how the AFP was being discredited because of the incident.