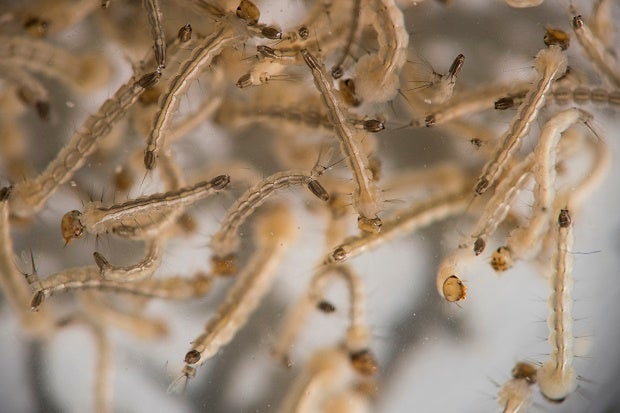 Aedes aegypti mosquito larvae sit in a petri dish at the Fiocruz institute in Recife, Pernambuco state, Brazil, Wednesday, Jan. 27, 2016. The mosquito is a vector for the proliferation of the Zika virus currently spreading throughout Latin America. New figures from Brazil’s Health Ministry show that the Zika virus outbreak has not caused as many confirmed cases of a rare brain defect as first feared. AP Photo

COPENHAGEN, Denmark—Denmark and Switzerland on Wednesday joined a growing number of European countries to report Zika infections among travelers returning from Latin America, where the mosquito-borne virus has been blamed for a surge in birth defects.

“A Danish tourist who traveled to Central and South America was diagnosed on his return with the Zika virus,” a hospital in eastern Denmark said in a statement late Tuesday.

The Danish patient was a young man who was expected to make a full recovery, the head of Aarhus hospital, Lars Ostergaard, told public broadcaster DR.

Two people returning to Switzerland from Haiti and Colombia were also diagnosed with the virus, the Swiss Federal Office of Public Health said.

Neither was pregnant and neither required hospital care, the statement said.

Health watchdogs in a string of European countries meanwhile said they had recorded Zika cases dating back to as early as March 2015.

The Netherlands confirmed 10 cases and Britain five, all among people returning from South America.

In Italy, the Spallanzani National Institute of Infectious Disease said four cases were recorded in March 2015, while in Portugal, the health ministry said four Portuguese had been infected.

All eight had been traveling in Brazil.

A woman in the Swedish capital Stockholm was diagnosed with the virus in July 2015, the Swedish Public Health Agency confirmed Wednesday.

“The symptoms were treated and the woman recovered,” said Karin Tegmark Wisell, head of microbiology at the health agency.

In Spain, two cases of Zika were detected in late 2015, authorities in the northwestern region of Catalonia confirmed on Friday.

Both were South American women—aged 30 and 45—who had traveled to the continent over Christmas. Diagnosed on their return, they have since fully recovered. Neither was pregnant.

In Moscow, Health Minister Veronika Skvortsova said the Russia authorities had been “monitoring (Zika) since it appeared.

“Now we are working on controlling it as soon as any strange strains appear … to have domestic medication for prevention and treatment.”

President Vladimir Putin added: “We need to pay attention to this … work with transportation companies, airlines, understand the signs and react quickly.”

“Of course mosquitoes cannot fly over the ocean, but infected people can and do.”

There is no vaccine or specific treatment for Zika, a flu-like disease with a rash that goes unnoticed in 70 to 80 percent of cases.

Most patients treat the symptoms simply with painkillers and other medication.

The virus is transmitted by the Aedes aegypti mosquito after it takes a blood meal from an infected person. The insect can also carry dengue, chikungunya and yellow fever.

Zika was first reported in Africa, Asia and the Pacific before leaping to the Americas, where it has been linked to a jump in the number of babies born with microcephaly, or abnormally small heads, particularly in Brazil.

The tally of cases of microcephaly in Brazil surged from 163 per year on average to 3,893 after the Zika outbreak began last year. Forty-nine of the babies have died.

Some 20 Latin American and Caribbean countries have been swept up in the outbreak which has extended as far north as Mexico.

Travelers have also brought it back to the US states of Florida, Hawaii and New York.

So far there has been no known cases of local transmission—infections that are generated within a country—in the US or Europe, although France said such cases had occurred in its departments and territories in the Caribbean basin.