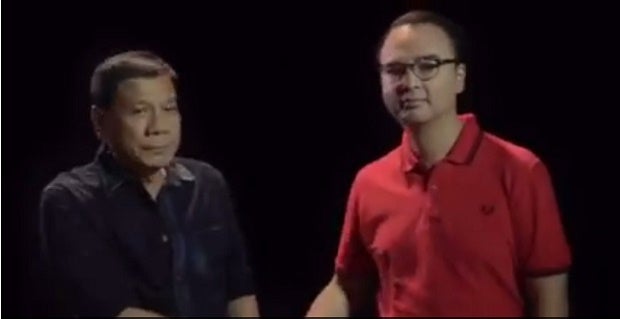 “Change is coming.” This was the message of presidential aspirant and Davao City Mayor Rodrigo Duterte and his running mate Senator Alan Peter Cayetano who both appeared in what seemed to be a campaign video. SCREENGRAB from Cayetano’s Facebook page

The country will become a ‘‘narco state” if the disorder brought by illegal drugs continues.

This was  the warning aired Wednesday by the tandem of Davao City Mayor Rodrigo Duterte and Senator Alan Peter Cayetano, who said the country is showing alarming signs of becoming a narco state.

“In the national capital region (NCR) where the country’s capital is situated, the government admitted that 92 percent of barangays are already infiltrated by illegal drugs. If Manila, the country’s seat of power, is helpless to address this, what more the other parts of the country where government presence is weak?” Duterte said in a press statement.

Duterte, who is seeking the presidency under the PDP-Laban banner, also noted the presence of international drug syndicates in the country, including the Sinaloa drug cartel, a Mexican-based group considered the largest and most powerful drug trafficking organization in the West.

‘‘This is a clear national security threat. This is an invasion of a new kind. Drug lords, domestic and foreign, have declared a war against our families and children, and the government is helpless about it,” Duterte said.

Cayetano, his running mate, said that if elected, they will implement a combination of national, regional and international strategies to combat drug trafficking.