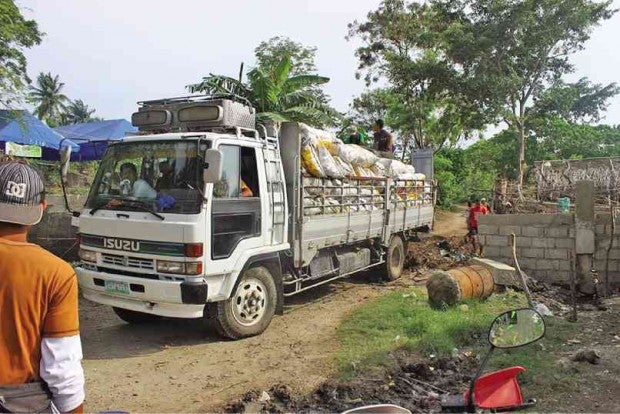 A TRUCK is loaded with copra harvested by farmers in Hacienda Matias in Quezon province. The estate, mainly planted to coconuts, has been placed under agrarian reform. DELFIN T. MALLARI JR.

It was a new day for farmers in an estate in Quezon province who had long been struggling to own the land they were tilling.

For the first time in their lives, farmers in the controversial Hacienda Matias in Quezon were able to keep the income from their harvests.

Maribel Luzara, head of Kilusang Magbubukid ng Bondoc Peninsula (KMBP), said in a recent phone interview that owners of the estate had decided to forgo their share of the farmers’ copra harvest.

This came after the farmers received certificates of land ownership award (Cloa) from the Department of Agrarian Reform (DAR).

The landowners, Luzara said, “now recognize the validity of the Cloa.” “Thank God,” said Luzara, herself a beneficiary of agrarian reform in Hacienda Matias.

Under the previous sharing system in the hacienda, a farmer is given only a third of the proceeds of farm products like copra.

The hacienda caretaker takes charge of selling the copra and automatically deducts the two-thirds share of the landowner from the proceeds.

The farmers shoulder all the production expenses but are not refunded after the sale.

Luzara said some of the Cloa holders who sold copra before Christmas had a happy holiday.

Luzara, however, has yet to receive her Cloa for a 3-hectare land that was allotted to her. This prompted her to continue giving the landowners’ share, which has gone down to only 25 percent of copra sales under a “provisional lease rental” agreement.

Luzara said she earned P13,000 from 11 sacks of copra she sold in Lucena City.

Luzara urged the DAR to hasten the full implementation of agrarian reform in the hacienda.

“There are still several hundreds of tenants who are qualified to become Cloa holders and also want to enjoy the fruits of their sweat and blood,” Luzara said.

She said most non-Cloa holders planned to stop giving shares of harvest to landowners since all seven land titles for Hacienda Matias were now in the name of the government.

This frees farmers from the obligation of giving landowners’ shares in harvest, not even under the provisional lease rental agreement.

But Cornelio Villapando, head of the DAR-Quezon II office, cautioned Luzara’s group against not giving the landowners their share. He said it would be illegal because the cancellation of the titles of the Matias estate owners had not been completed.

He said the process to determine the value of the land was ongoing. “That means landowners still exercise ownership of the lands,” Villapando said in a recent phone interview.

Under the provisional lease rental agreement, the landowners are entitled to at least a fourth of the harvest. The rest goes to the farmer.

For several years, owners of the 1,715-ha Matias estate, mostly planted to coconut and straddles the villages of Butanglad and Don Juan Vercelos in San Francisco town in the Bondoc Peninsula district, have been opposing the government land reform program on the grounds that the estate is a “cattle ranch.”

The government rejected the argument. Early last year, 283 farmers received their Cloa for about half of the estate covering three of the seven land titles but were unable to occupy the land due to harassment by hacienda workers and legal maneuvers of the landowners.

In July last year, DAR personnel aided by soldiers and policemen finally started the formal installation of the Cloa holders to their lands.

The continuing hardship of farmers and other impoverished sectors in Quezon is prodding groups representing them to plan a boycott of the coming elections.

Jansepth Geronimo, spokesperson of Kilusan Para sa Tunay na Repormang Agraryo at Katarungang Panlipunan (Katarungan), said his group was considering a boycott of the elections if no one among the candidates for President would commit to returning the coco levy funds to farmers.

“We have had enough of empty promises,” Geronimo said in a recent interview.

He said the groups had about 10,000 members, most of them heads of families.

He said the groups also expected to also get support from other people’s organizations in Metro Manila and in other parts of the country.

Geronimo said members of Quezon-based organizations, along with their spouses and children of voting age, had started informal campaigns in their respective villages for the planned presidential election boycott.

KMBP president Luzara said her group would support the planned boycott. “As a matter of fact, most of us have already decided to boycott this presidential election,” Luzara said in a separate phone interview.

Luzara led a delegation of some 50 KMBP members from Quezon’s Bondoc Peninsula who went to the DAR national office recently to seek a dialogue with Agrarian Reform Secretary Virgilio de los Reyes over the unfinished distribution of the 1,715-ha Matias estate in San Francisco town to land reform beneficiaries.

Luzara accused the five presidential candidates of fooling the people with their petty politicking instead of offering concrete solutions.