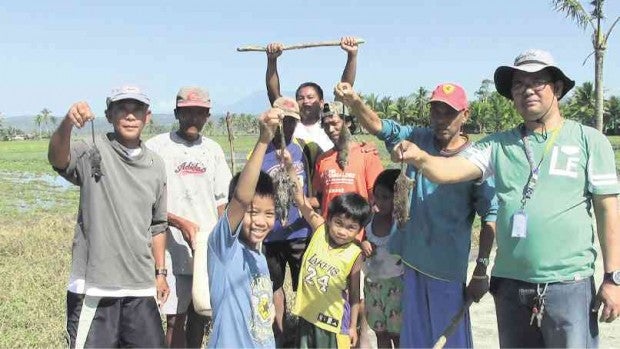 GETTING EVEN Rice farmers and several children show off the dead rats that attacked their fields in Barangay Centro Occidental in Polangui, Albay province. MICHAEL B. JAUCIAN/INQUIRER SOUTHERN LUZON

POLANGUI, Albay—Rat infestation is worsening in this first-class municipality, laying waste to at least 100 hectares of rice lands, according to farmers and agricultural officials.

Municipal agriculturist Alfredo Mariscotes Jr. said his office had offered farmers a P5 incentive for every rodent they had “eliminated” from their fields to help ease their burden financially. They need only to present rodent tails to get the incentive, he said.

“If we can’t eliminate them, we will be seeing poor harvest [in April or May],” he said.

Rats began to attack rice farms in three villages early this month, he reported. Affected were at least 25 ha in each of the villages of Sugcad and Lanigay, and 50 ha in the village of Centro Occidental.

Polangui, which has a land area of 14,530 ha and annual income of P170 million, is situated 32 kilometers northwest of the capital city of Legazpi. It has 44 villages, 41 of which are classified as rural with vast agricultural lands mostly planted with palay, coconut, sugarcane, banana, corn and fruit trees.

Municipal agriculture workers and the farmers have been working double time to rid the fields of rats, but they felt helpless because the rats multiplied so fast, Mariscotes said.

To control the rodent population, the farmers have decided to do rat blanketing, or to manually search for the rats’ hiding places and kill them, he added.

Mariscotes said some farmlands that were left unplanted for some time could have become breeding places for the rodents.

“Searching for their breeding areas I think is the best way to control rats. But these pests seemed to have become wiser as they would no longer eat the bait the farmers have laid out for them,” he added.

Farmers Ricardo Sario, 54, and John Eric Baylon, 25, said they had no other means of getting rid of the rats other than doing it manually. Otherwise, they said, they could not even hope for their palay to grow to maturity since the rats have been destroying their seed beds.

Another farmer, Walter Celestra, said he had been losing sleep just to guard his newly planted seed beds. He said he needed to stay awake at night and even used a generator set to light up his rice field.

“It’s OK if I have sleepless nights. What is important is that I want to make sure that the rodents will not destroy my newly planted palay,” he said.