Malaysia says metal on Thai beach not from Flight 370 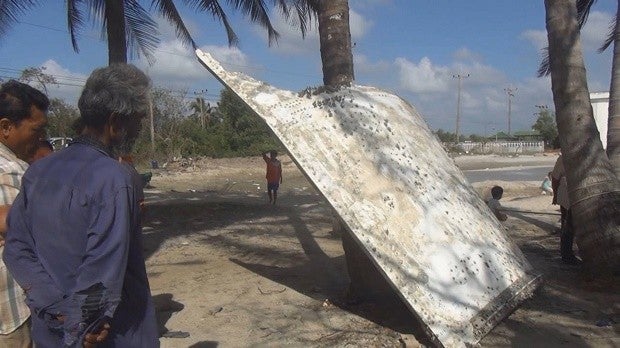 In this Sunday, Jan. 24, 2016 file photo, Thai people look at a large chunk of metal found on a beach in Nakhon Si Thammarat province, Thailand. A Japanese rocket maker said Monday, Jan. 25 that a large piece of metal that washed up on a beach in Thailand is likely part of a rocket launched by Japan, not a missing Malaysian plane. The discovery of the metal sparked speculation that it might be from Malaysia Airlines Flight 370, which disappeared almost two years ago. AP FILE PHOTO

KUALA LUMPUR, Malaysia — Malaysia confirmed Tuesday that the piece of metal found washed up on a Thai beach last week was not from Malaysia Airlines Flight 370 that went missing almost two years ago in one of aviation history’s most enduring mysteries.

The confirmation came a day after a Japanese rocket maker said the piece is likely part of a rocket launched by Japan.

Transport Minister Liow Tiong Lai said in a statement that Malaysian and Thai experts examined the debris and ascertained that the numbers engraved on the body, the wire bundle and the bolts do not match those of a Boeing 777, which Flight 370 was operating.

The jetliner took off from Kuala Lumpur on March 8, 2014, for Beijing with 239 people on board. But it soon lost communications and made a sharp turn away from its destination before disappearing. It is presumed to have crashed in the southern Indian Ocean, far away from the western edge of Thailand.

Liow said that the part numbers which were found on the gently curving piece of metal are not listed in the Malaysia Airlines’ catalog manual for a 777.

“Based on these identifying details, the team has confirmed that the debris does not belong to a B777 9M-MRO aircraft (MH370),” he said.

On Monday, Mitsubishi Heavy Industries said the metal piece is “highly likely” to be part of a Japanese H-IIA or H-IIB rocket that was launched from southern Japan, based on an initial examination of photos and videos of the object.

Company spokeswoman Sayo Suwashita said officials are trying to determine which rocket it could be from and its launch date. Rocket debris falls into the ocean after every launch, and most is collected but sometimes pieces can be found some distance from the launch site, including in foreign waters, she said.

Liow said Sunday that the search for the missing jet is ongoing in the Indian Ocean and that its second phase is expected to be completed by June. Australia has led a multinational search that has so far cost more than $120 million.

READ: Navy looks for trace of long-missing Malaysian plane but comes up empty