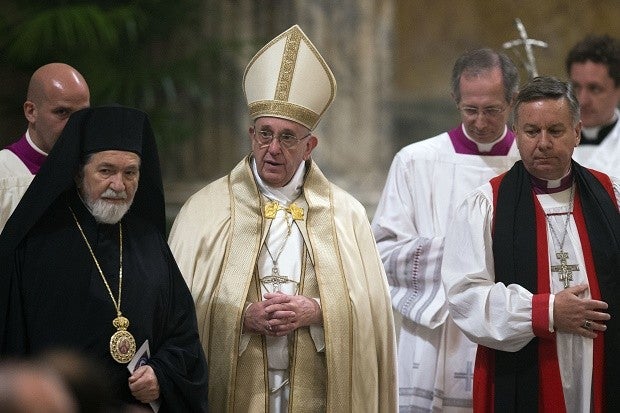 Pope Francis is flanked by Ortodox Primate of the Metropolis of Italy Gennadios Zervos, left, and the representative of the Archbishop of Canterbury to the Holy See David Moxon, at the end of the second Vespers prayer in St. Paul Outside the Walls Basilica on the occasion of the liturgical Feast of the Conversion of St. Paul the Apostle, in Rome, Monday, Jan. 25, 2016. AP

VATICAN CITY, Holy See — Pope Francis will celebrate the 500th anniversary of the Reformation by attending an ecumenical service in Sweden as a guest of the Lutheran church, the Vatican said Monday.

In a highly symbolic act of reconciliation that would even recently have been unthinkable for a Catholic pontiff, Francis will visit the Swedish city of Lund on October 31 for a commemoration jointly organized by his own inter-faith agency and the Lutheran World Federation (LWF).

The surprise move will see the head of the world’s Catholics worship alongside the heirs to a religious tradition founded in opposition to the church of Rome and which once regarded the pope as the anti-Christ.

The modern-day Lutheran church in Sweden continues to uphold principles that are anathema to all but the most radical Catholic theologians: it has had a female archbishop, Antje Jackelen, since 2013; has ordained women pastors since 1960 and embraces homosexuality to the point of having both lesbian and gay bishops.

Jackelen said Monday she hoped the commemoration would “contribute to Christian unity in our country and throughout the world.”

In a joint statement, the two churches said the event would “highlight the solid ecumenical developments between Catholics and Lutherans.”

The event may nevertheless raise eyebrows among some conservatives on both sides — Francis came under fire in November for suggesting a Lutheran could take communion from a Catholic priest.

At a service Monday in Rome, Francis asked forgiveness for the way Catholics had treated other Christian believers over the years, and also invited Catholics to pardon those who had persecuted them.

“We cannot undo what happened but we cannot allow the weight of the mistakes of the past to poison our relations,” he said.

The service in Lund will take place exactly one year before the 500th anniversary of German monk Martin Luther nailing his famous written protest against the Church’s abuses of its power to the door of a church in Wittenberg.

The act of defiance of papal authority resulted in Luther being excommunicated and declared an outlaw by Rome.

The posting of the “95 theses” is considered the starting point of the Reformation — a dissenting movement that created a religious and political schism in Europe which took centuries to fully unfold and featured many violent chapters before Protestant churches became dominant across most of northern Europe.

No to papal infallibility

The numerous conflicts and waves of repression related to the Reformation left a legacy of deep mistrust between the Catholic and Protestant wings of Christianity which has only subsided in the last half-century.

Martin Junge, the LWF general secretary, said such divisions belonged to the past.

Cardinal Kurt Koch, the president of the Vatican’s Council for Promoting Christian Unity (PCPCU), said a “Christocentric approach” was required.

The Lund event is part of a dialogue in which the Lutheran and Catholic churches are attempting to agree on a common account of the painful events of the reformation.

The two Churches agreed in 1999 on a joint statement addressing the theological issues at the root of the upheaval.

These included questions such as whether humans could earn their place in heaven through good deeds or whether salvation comes exclusively through the grace of God.

Luther and his followers championed the Bible’s translation into local languages and its status as the sole source of divine authority.

They also opposed the sale of indulgences and other forms of clerical corruption and challenged notions such as the idea of penance, the veneration of saints, the existence of purgatory and the infallibility of popes. CB