Zika virus seen spreading to nearly all countries in Americas—WHO 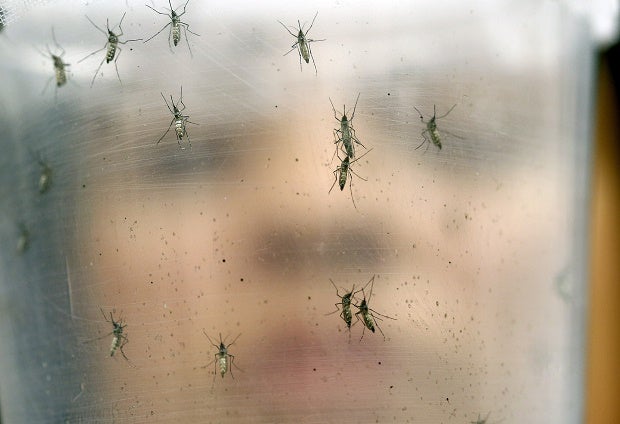 In this Jan. 18, 2016 photo, a researcher holds a container with female Aedes aegypti mosquitoes at the Biomedical Sciences Institute in the Sao Paulo’s University, in Sao Paulo, Brazil. The Aedes aegypti is a vector for transmitting the Zika virus. The Brazilian government announced it will direct funds to a biomedical research center to help develop a vaccine against the Zika virus linked to brain damage in babies. AP Photo

GENEVA, Switzerland—The Zika virus, a mosquito-borne disease suspected of causing serious birth defects, is expected to spread to all countries in the Americas except Canada and Chile, the World Health Organization said.

Zika has suspected but unproven links to microcephaly—in which babies born to women infected during pregnancy have abnormally small heads.

The virus is already present in 21 of the 55 countries and territories across the Americas, the WHO said in a statement Sunday.

But it stressed that the Aedes aegypti mosquito, which carries Zika and also dengue and chikungunya viruses, is already present in all countries in the Americas besides Canada and Chile.

WHO pointed out that since people in the region had not been exposed to Zika before it emerged in Brazil last May they lacked immunity, allowing the virus to spread quickly.

The UN health agency said it therefore “anticipates that Zika virus will continue to spread and will likely reach all countries and territories of the region where Aedes mosquitoes are found.”

WHO chief Margaret Chan told the opening of the organisation’s executive committee meeting in Geneva Monday that “the explosive spread of Zika virus to new geographical areas, with little population immunity, is (a) cause for concern, especially given the possible link between infection during pregnancy and babies born with small heads.”

She stressed that “a causal link between Zika infection in pregnancy and microcephaly has not been established,” but added that “the circumstantial evidence is suggestive and extremely worrisome.”

A surge in incidents across Latin America, notably in Brazil, has prompted the United States and other governments to warn pregnant women against travelling to the region—an alarming prospect for Brazil as it gears up to light the Olympic torch on August 5.

Brazil has recorded 3,893 microcephaly cases since an unusual spike in the rare condition was noticed in the country’s northeast in October. Previously an annual average of 160 cases was the norm.

WHO meanwhile has refrained from issuing travel warnings, stressing that the most effective form of prevention is getting rid of stagnant water where mosquitos easily breed, and personal protection against mosquito bites such as using bug repellant and sleeping under mosquito nets.

The agency said that while it is clear that Aedes mosquitos transmit Zika, evidence of other transmission routes was limited.

But it pointed out though that the virus, which in most infected people only means short-lived flu-like symptoms, could be transmitted through blood and had been isolated in human semen.

“One case of possible person-to-person sexual transmission has been described,” the agency said, adding though that it needed more evidence to say the virus can be transmitted through sexual contact.