A prayer ritual for Mamasapano dead 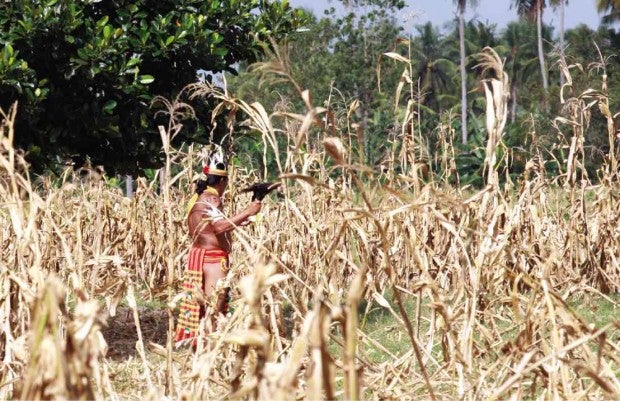 A SPIRITUAL leader from the Cordillera performs a ritual of prayer and animal sacrifices on a cornfield in Barangay Tukanalipao in Mamasapano, Maguindanao province, where 44 police commandos, 17 Moro rebels and three civilians were killed in an encounter a year ago. JEOFFREY MAITEM/INQUIRER MINDANAO

MAMASAPANO, Maguindanao—Wearing a loincloth (“bahag”), a spiritual leader from the Cordillera region in northern Luzon walked around the cornfield in the village of Tukanalipao on Monday.

He was performing a ritual (“kapya”), offering prayers and sacrificing animals for the souls of 44 police commandos who died here a year ago.

“Before we went here, there was a trauma healing process among the relatives. It is an important process because they cannot sleep well and they have no peace of mind,” said Andress Ngaoi, an engineer who represented the council of elders from the northern region.

“We have to do the prayer here because if the souls of their loved ones are still outside Cordillera, they will have no peace of mind,” he added.

“We are open to that because we want to have a good relation with the Muslims here in Mindanao,” he said.

Mamasapano Mayor Benzar Ampatuan told the Inquirer that memories of what happened a year ago were still fresh.

“It hurts us. The memories are still there. The incident is hard to forget because there were innocent civilians killed in the operation,” he said.

Policemen, belonging to the 84th Company, entered Mamasapano to get terror suspect Zulkifli bin Hir, alias “Marwan.” After killing Marwan and while they were on their way out, they clashed with armed men believed to be supporters of the terrorist.

“It’s not yet served. It’s the discretion of our central committee,” Al Haq said. “But we assure the public that those involved will be given disciplinary actions,” ranging from a six months’ suspension to dismissal. Jeoffrey Maitem, Nash Maulana and Edwin O. Fernandez, Inquirer Mindanao