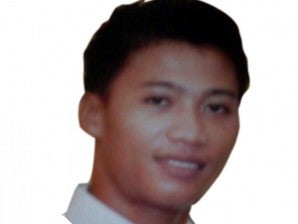 AT LARGE. Photo of Lester Ivan Lopez Rivera, the suspect tagged in the UPLB student’s rape-slay, released by the Laguna Provincial Police Office

MANILA, Philippines—Police have arrested on Thursday a suspect to the recent murder case of a college student in Laguna.

Cruz said that De Guzman was the driver of the tricycle used in abducting victim Given Grace Cebanico, a third year Computer Science student from the University of the Philippines Los Baños, while walking home after a group meeting on Monday.

He said that she may have been forced into the tricycle while walking on Diamond Street in Umali Subdivision, a residential area located near the UPLB campus.

Cebanico was staying at the 5th of September Mansion, a dormitory on Diamond Street.

Still at large and being hunted down by the police was the other suspect, Lester Ivan Lopez Rivera, a bank security guard from Bay, Laguna.

A P25,000 reward is being offered by the Laguna police for information that may lead to Rivera’s arrest, Cruz said.