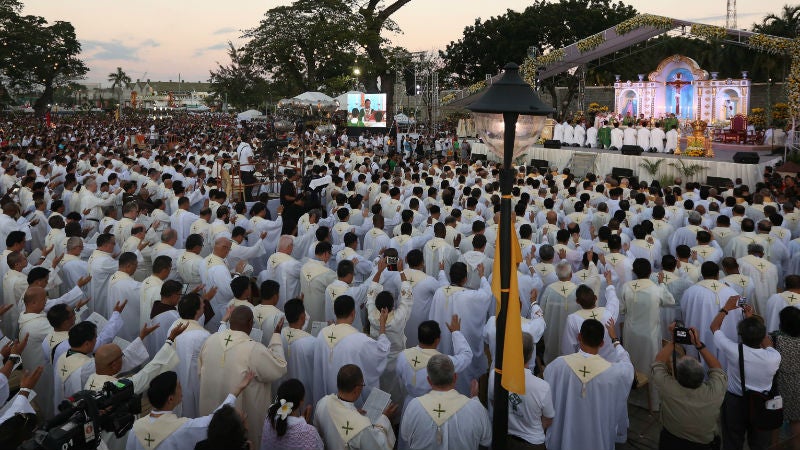 CEBU CITY—The official representative of Pope Francis to the 51st International Eucharistic Congress (IEC) that opened here on Sunday urged Catholics to declare a “third world war” against poverty and injustice while also calling on them to unite against Christian persecutions, especially in countries where Christianity is a minority.

In his homily at the opening Mass of the IEC at Plaza Independencia, Cardinal Charles Maung Bo, archbishop of Rangoon, Burma (Myanmar), said the Holy Eucharist, both the ritual that Catholics celebrated in memory of the crucifixion, death and resurrection of Christ, and the sacrament or symbol of the body and blood of Christ that they consumed as spiritual nourishment, meant that Catholics should commit to battling poverty and injustice in the world.

He said Filipinos needed to declare war on poverty and injustice. Catholics around the world need to fight social iniquity and marginalization, he said.

“The biggest Catholic country needs to declare a third world war against poverty and economic injustice,” he said.

The Salesian cardinal also urged Catholics to unite against the persecution of Christians, alluding to the campaigns against Christians in the Middle East by the Islamic State group and in China by the communists.

“Today, Christianity is a risk,” he said. But he also urged Christians to be a source of unity and peace.

To the delight of the crowd, Bo declared: “The Philippines needs peace. The world needs peace.”

Speaking against the backdrop of the oldest Spanish colonial fort in the Philippines named after St. Peter the Apostle, Bo lavished praise on the Philippines on behalf of Pope Francis, a successor to Peter, held by Catholics as the first Pope.

“The Pope loves all of you, especially Filipinos,” he said. He repeated the message in Filipino and Cebuano, further delighting the crowd.

In his welcome remarks, Cebu Archbishop Jose S. Palma, who’s also president of the 51st IEC, said the congress was being held to resolve the “observable dichotomy between worship and life” among Catholics, as well as find ways in which their devotion to the Eucharist could be “manifested” in practice.

Palma said everyone was eager to hear from Bo.

“We always turn to St. Peter for strength,” he told Bo. “We will listen to you as to the Holy Father. You are the words and presence of St. Peter himself.”

Pope Francis himself will speak to the congress via a video message during the closing Mass on Jan. 31. He is expected to announce the country that will host the 52nd IEC.

Bo said he was honored and humbled to have been chosen by Pope Francis as his representative to the IEC in Cebu, which he called “the gateway of Christianity to this great nation,” alluding to the first Christian conversions that happened here when the Magellan expedition reached the country in 1521.

He said it was only proper for the IEC to be held in Cebu, “the cradle of Christianity in the Philippines.”

“You are a great nation. You are the light of Asia,” Bo told the crowd, drawing applause after applause.

He said Filipino Catholics, especially the great army of overseas workers, were leading the Church’s call for “new evangelization.”

“In many parts of the world, Catholicism means Filipino presence,” he said.

At the start of the Mass, the official appointment of Bo by Pope Francis was read. Later Vatican officials showed the crowd a gift from Pope Francis—a book of the Gospels bound in ivory-white, with a Byzantine icon on the front cover.

The Mass was celebrated in several languages. The prayers of the faithful were read in Filipino, Spanish, French and Portuguese.

Bo led the celebration of the Eucharist in English.

The hymns were performed by the 60-member Christ the King College Youth Symphony Orchestra (CKC-YSO) of Calbayog City in Samar and the Koro de San Agustin of Tuguegarao City. The CKC-YSO was the orchestra that provided music for the concluding Mass of Pope Francis at Quirino Grandstand in Rizal Park, Manila, in January last year.

Both the Cebu archdiocese and the police placed the crowd at 350,000 people as of 6 p.m.

According to Msgr. Joseph Tan, spokesperson for the Archdiocese of Cebu, the Mass was concelebrated by at least 1,500 priests, 200 bishops, and 10 cardinals, including Manila Archbishop Luis Antonio Cardinal Tagle, Cotabato Archbishop Orlando Cardinal Quevedo, and retired Cardinals Gaudencio Rosales of Manila and Ricardo Vidal of Cebu. 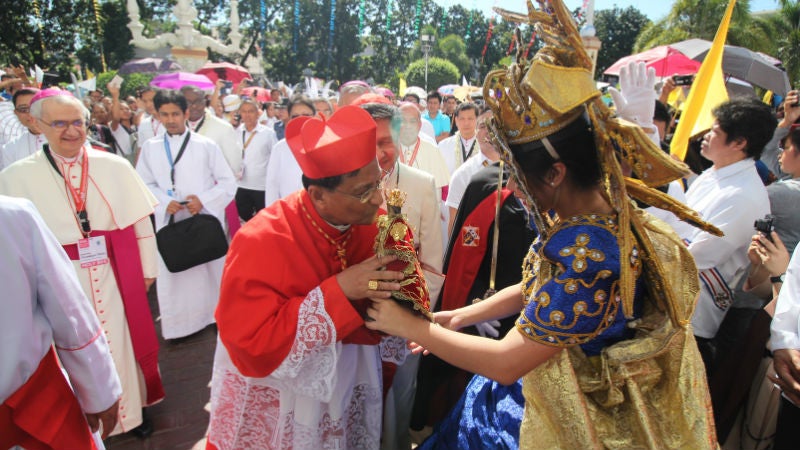 CEBU WELCOME Cardinal Charles Maung Bo, archbishop of Rangoon (Yangon) and official representative of Pope Francis to the 51st International Eucharistic Congress in Cebu City, kisses an image of the Santo Niño held by members of the Sandiego Dance Company, who welcomed him with a Sinulog dance. SAMMY NAVAJA/CONTRIBUTOR

Some 13,000 have so far registered for the congress, of whom 13 percent are foreigners.

Aside from the Philippines, delegates to the congress come from at least 70 countries, organizers said.

The congress will largely consist of “catechesis,” or lectures, on the Christian faith by leading Church hierarchs and writers and scholars, as well as prayers, reflection and sharing sessions, a theater festival, a heritage and museum night, and even a workshop on the ministry for the deaf and disabled.

This is the second time that the Philippines is hosting the IEC. It first hosted the congress in 1937, when the 33rd IEC was held in Manila.

The choice of Cebu was made during the last IEC in Dublin, Ireland, and Cebu was chosen because it was the first to accept the Catholic religion in 1521, making it the cradle of Christianity in the Philippines. With a report from Ador Vincent S. Mayol, Inquirer Visayas

Read Next
Duterte: SAF 44 sent to lion’s lair
EDITORS' PICK
Nesthy Petecio assured of Olympics bronze, ousts Colombian foe
Harnessing technology for quality education
Trillanes: No Magdalo support if Robredo gives way to Lacson
Tips for a cheerful life
After Olympic win, PAF promotes Hidilyn Diaz to staff sergeant
Connect to PH’s fastest network with new Signature Plan Lite at only P599 per month
MOST READ
Philippines to bring home multiple Olympic medals for first time since 1932
Isko for 2022? Manila mayor takes a swipe at Duterte in live broadcast
Lacson bares talks with Robredo ahead of 2022 polls
Why is Taiwan not called Taiwan at the Olympics?
Don't miss out on the latest news and information.