Cardinal Bo to Catholics: Devote time to help the poor, too 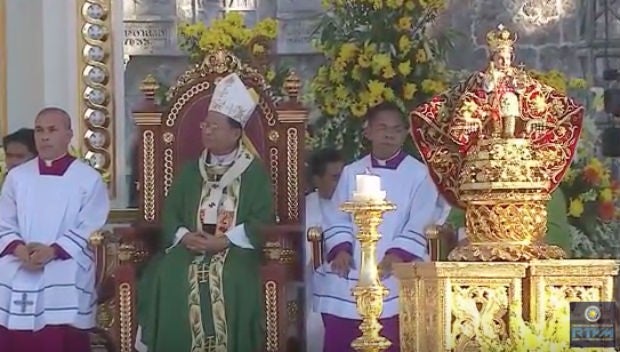 CEBU CITY – In a world where millions remain poor and hungry, “devotion is good but not enough.”

This was the message of Cardinal Charles Maung Bo during his homily at the opening of the 2016 International Eucharistic Congress (IEC) here.

“Christ is calling us to be disciples to carry his cross,” Bo told thousands of Catholic devotees at the Plaza Independencia here.

Bo was sent by Pope Francis as the Papal Legate in this year’s global fellowship of the Catholic faithful.

He said devotees do not only confine themselves within the corners of the church but goes out to the streets to uplift human dignity.

“Can we feel the presence of God with our brothers and sisters?” he said, citing extreme poverty, abortion, death penalty, and euthanasia as among the problems in the world.

He cited a data from the United Nations Children’s Fund (Unicef), saying that 20,000 die of starvation and malnutrition everyday, which totals to 900,000 a month and ten billion a year.

Starvation, he said, is a “silent genocide.”

“What is the greatest mortal sin? Seeing a child dying of starvation,” he said.

He said the “Eucharist and the poor are inseparable.”

According to him, Eucharist is a dream and a reality.

“Reality because Jesus is truly present. A dream because it is the hope of the future,” he said.

Despite having different social status, he said that when one approaches the Eucharist everyone is equal.

“Today we have gathered from various backgrounds, the rich and the poor, the noble and the poor, the aristocrat and the servant, but when you approach the altar, the Eucharist strips you off all your social status. You are equal,” he said.

In an unequal and uncaring world, “the Eucharist calls us to justice.”

He called for a commitment to justice against a world that produces more weapons  while more than half billion do not get food everyday.

The real fasting, he said, “is breaking the chains of injustice” in the world.

“Remove oppression, share the food with the hungry, sheltering the homeless,” he said.

He said the Philippines’ “urgent task,” the biggest Catholic nation in Asia, is to declare a war on forces that keep thousands still in poverty and putting thousands to unsafe migration.

He said the economic and environmental injustice perpetrated by impunity in the Philippines as well as other countries, makes the Eucharistic gathering a historic one.

“An economic system that does not treat human beings as commodities is possible,” he said.

Cardinal Bo also urged participants of the 51st IEC to be agents of peace.

During his homily, Bo recognized how Filipinos are being disciples to the world.

The Philippines, he said, is a “great nation” and a light of Catholicism to Asia.

“In some parts of the world, Catholicism means Filipino presence,” he said.