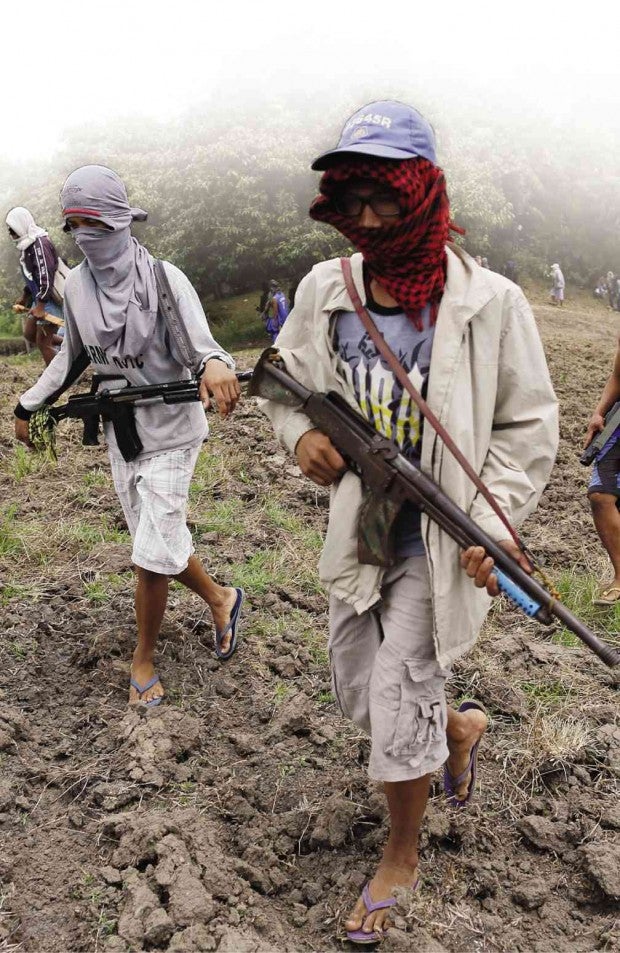 MEMBERS of a previously unheard of militia calling itself Red God Soldiers make their presence known to the public on Jan. 19 at a clandestine press conference somewhere in Central Mindanao. JEOFFREY MAITEM/INQUIRER MINDANAO

COTABATO CITY, Philippines—Peace advocates in Mindanao expressed lament over the emergence of a Christian vigilante group even as they lambasted the government for failing to provide protection to ordinary people which they said gave rise to vigilantism.

Bobby Benito, executive director of the Bangsamoro Center for Just Peace, told the Inquirer by phone on Saturday that the formation of the so-called Red God Soldiers was “not a good development because it might revive the times of military-backed vigilante groups in 1970s.”

In the 1970s, the Ilaga, a Christian group known for its bloody attacks and human rights abuses in Mindanao, was tapped to help in the war on Muslim rebels.

The existence of the Ilaga further widened the divide between Christians and Muslims in Mindanao as its members targeted even hapless civilians. Among its bloodiest attacks was the June 1971 massacre at a mosque in Barangay Manili in Carmen, North Cotabato, where 65 men, women and children were killed.

There was also the Christian vigilante group Tadtad, which targeted Muslims even if they were not armed.

But Benito said the creation of the Red God Soldiers is also proof that the government failed to provide protection to its people.

“They lost their trust in our rule of law. If the state has provided them protection, I don’t think they will arm themselves,” he said.

Benito warned that the government’s continued failure to provide security to its people would give rise to more vigilante groups in the future, which would be dangerous as it would further divide the people.

Fr. Eliseo Mercado Jr., of the Notre Dame University’s peace studies, said the formation of the new Christian armed group showed that the police and the military could not protect the people.

“There is no place for any armed group in a safe and secure environment. Thus the emergence of any armed groups—insurgents and vigilantes or militias—reveals the failure of government and state to secure and protect all its citizens,” he said.

Mercado said it also showed the “big disconnect between the peace process and realities on the ground.”

Von Al Haq, spokesperson for the Bangsamoro Islamic Armed Forces, the Moro Islamic Liberation Front’s military wing, said he could only hope that the Red God Soldiers will not use their guns against civilians.

Members of the Red God Soldiers gathered in a hinterland area somewhere in Central Mindanao early this week, announcing their presence and saying that authorities are aware of their existence.

While they said they would be just a defensive force, a spokesperson for the group who identified himself as Brother Asiong, said they would not cower in fear of the Bangsamoro Islamic Freedom Fighters, which the Red God Soldiers blamed for brutal attacks on civilian communities.  Jeoffrey Maitem, Inquirer Mindanao

Read Next
The price of change in Tukanalipao
LATEST STORIES
After winning title, time for LA Tenorio to give back to Batangas folk
‘Mia’: Rom-com with a cause a career-boosting showcase for Coleen Garcia
No.13 lucky for Orlando Bloom
The ties that bind: Why the guys of Black Eyed Peas prefer to stay together
How Yam handles flirtatious guys
MOST READ
Nadine Lustre’s phone stolen in Brazil
Will you be the first P16 Billion Powerball jackpot winner from the Philippines?
Gretchen Barretto’s daughter Dominique graduates magna cum laude from California college
Ginebra beats Meralco again to capture PBA Governors’ Cup title
Don't miss out on the latest news and information.