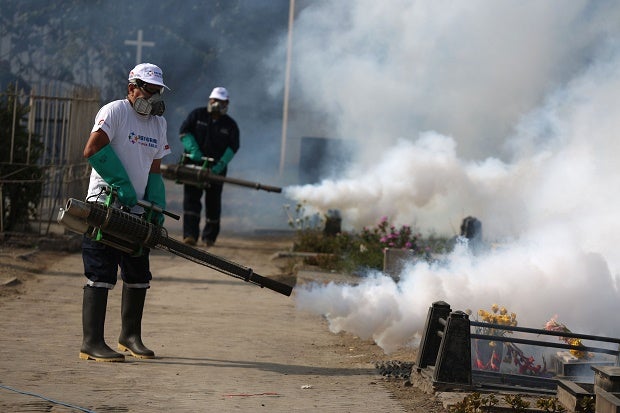 Health workers fumigate to prevent Dengue, Chikunguya and Zika virus, at El Angel cemetery, in Lima, Peru, Wednesday, Jan 20, 2016. A U.S. warning urging pregnant women to avoid travel to Latin American countries where the mosquito-borne virus is multiplying threatens to depress tourism to the region, one of its few bright spots at a time of deep economic pain. AP Photo

NEW YORK, United States—Three people in New York have tested positive for the Zika virus, which has been blamed for a surge in babies born with abnormally small heads in Latin America, city officials said Friday.

All three had traveled to areas outside the United States where the mosquito-borne ailment is spreading rapidly, the New York State Department of Health said, without specifying where.

Officials said one person has completely recovered, while the others are still getting better.

US health authorities earlier on Friday expanded a travel warning for pregnant women to avoid 22 places in Latin America and the Caribbean due to the Zika virus.

It has been linked to thousands of cases of a birth defect known as microcephaly, when babies are born with abnormally small heads, which can cause brain damage.

Women in these areas are urged to take measures to avoid mosquito bites, including wearing long sleeves and pants, and applying insect repellent.