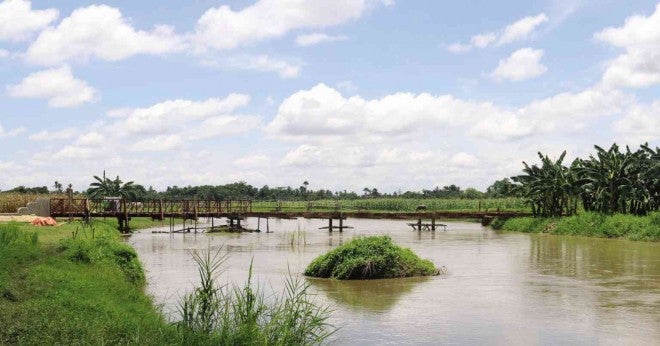 MAMASAPANO, Maguindanao—Last week, workers filled surface cracks on the old Makar Road with concrete, a sign, according to residents, that Manila officials were coming to Tukanalipao village here for the first anniversary of the Mamasapano clash on Monday.

But left unaltered, and still used by locals, is the wooden footbridge used by the commandos from the Philippine National Police Special Action Force (PNP-SAF) to cross the Tukanalipao River on a covert mission to get one of Southeast Asia’s most wanted terrorists, Malaysian Zulkifli bin Hir, alias “Marwan.”

The commandos found Marwan in his hut in Inunug subvillage and killed him, but lost 44 of their own in a 15-hour gun battle with Moro rebels after their US-aided mission backfired.

Nearly a year after that clash on

Jan. 25, 2015, the officials who botched the SAF mission remain unpunished and although their prosecution has started, the 99 Moro rebels held responsible for the deaths of the commandos remain at large.

Commemorative plans include the raising of the Philippine flag to half-staff at the municipal hall on Monday in honor of the 44 commandos from the 55th and 84th Special Action Companies (SAC) of the SAF and the other people, including seven residents, killed in the Mamasapano clash.

Mayor Benzar Ampatuan said the town had since moved on, with the residents concentrating on their daily activities.

But healing does not come easy for some. Farmer Malumpil Dagandalan said he had hardly fixed his house, which was damaged when it was hit by mortar fire during the clash between the police commandos and the rebels.

Dagandalan works on the cornfield where the gun battle took place and he cannot forget that there among the corn stands the body of a male resident of the town, his hands tied behind him with a rope, was found the next day.

Ampatuan said the clash may have adversely affected the residents and the town’s image, but Mamasapano had bounced back.

He said the local pilot farms had nearly completed tests for the use of “halal” (permissible) feeds in poultry raising.

The experiment has shown that two varieties of chicken have gained 150-180 grams in weight in just two weeks of daily feeding with halal feed-mix.

Farmers said they had observed that the locally made feed-mix could surpass the commercial brands’ performance in growth-rate effect on farm-raised chickens.

Mamasapano has consistently made it to the list of the Department of the Interior and Local Government (DILG) for the Seal of Good Housekeeping in Local Governance.

In May 2012, President Aquino and then Interior Secretary Mar Roxas presented the town with a trophy and cash reward for topping the national category of the award.

Despite the clash, Mamasapano was one of the ARMM towns that topped the DILG’s assessment of local governments for good financial management and disaster preparedness in 2015.

Masukat said officials from the United Nations Food and Agriculture Office had also been watching local and national developments related to the clash, as the agency had been supporting an organic agriculture project for local rice farmers since 2014.

Municipal employees said the only thing that slowed down development, specifically at the local government center, was slow Internet.

Dinky off to Mamasapano with P10M in cash, tells poor sorry

Enrile: I have Mamasapano proof vs Aquino