Head of militia in ‘lumad’ slays briefly held by cops 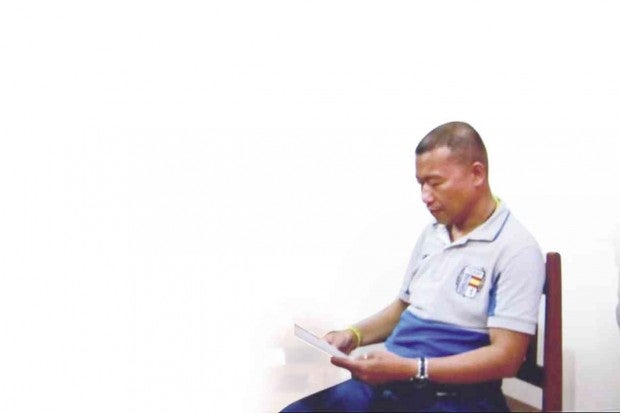 Datu Calpet Egua reads a court order releasing him on bail that was handed to him by a police officer after his surrender. PHOTO FROM AGUSAN DEL SUR PNP

PROSPERIDAD, Agusan del Sur—The highest ranking leader of a “lumad” paramilitary group being held responsible for the killing of a school director and two other lumad leaders in Lianga, Surigao del Sur province, surrendered to police, but for another criminal case.

Datu Calpet Egua, head of the Magahat-Bagani force in the Agusan and Surigao areas, spent barely a day in police custody after he posted bail for a robbery case.

Egua’s group was tagged in the attack on the village of Diatagon in Lianga that targeted a school being run by the Alternative Learning Center for Agricultural and Livelihood Development (Alcadev).

Other Magahat-Bagani leaders tagged in the attack were identified as Marcos Bocales and Marcial Belandres.

Egua, who escaped several assassination attempts by communist rebels in the past, turned himself in on Thursday for a robbery case filed in a court in Lianga over a year ago.

Supt. Rodelio Roqueta, Agusan del Sur deputy police provincial director, had said Egua wanted to surrender a long time ago but was still recuperating from wounds he suffered in a clash with communist rebels.

Quoting Egua, Roqueta said the lumad militia leader decided to surrender to prove he was not involved in the attack on Alcadev on Sept. 1 last year.

An Inquirer source said a former police chief of this town, a close friend of Egua, facilitated the clandestine surrender of Egua.

He said a check made with other police units in Surigao del Sur showed Egua is facing no other criminal case.

Egua’s followers—Bobby and Loloy Tejero and Margarito Layno—have been charged with the Surigao murders and are now being hunted by police after the Department of the Interior and Local Government offered a P1.2-million reward for each of the three.

“Well, that is good news but it (robbery case) is bailable so after posting bail he can continue with atrocities against our constituents,” Pimentel said in a text message.

Bayan Muna Rep. Carlos Isagani Zarate said the failure of authorities to arrest Egua, “even if they had all the means to do so,” confirmed that the Magahat-Bagani leader was being protected by authorities.

Agusan del Sur Gov. Adolph Edward Plaza has called on residents in the remote strife-torn village of La Purisima to end killings between the camps of feuding tribal leaders.

“I’m tired of listening to the news about the killings here in your village,” said Plaza in a speech during a medical and feeding mission.

Plaza expressed concern over the recent killing of Juan Perez, an elderly Manobo tribal leader, early this month which sparked mass evacuation among lumad villagers in the sitio of Gacub.

Perez is the uncle of Gilbert Perez, the village chieftain of La Purisima, who was killed by still unidentified men early last year in a spate of violence believed to be related to unresolved land conflicts among Manobo leaders.