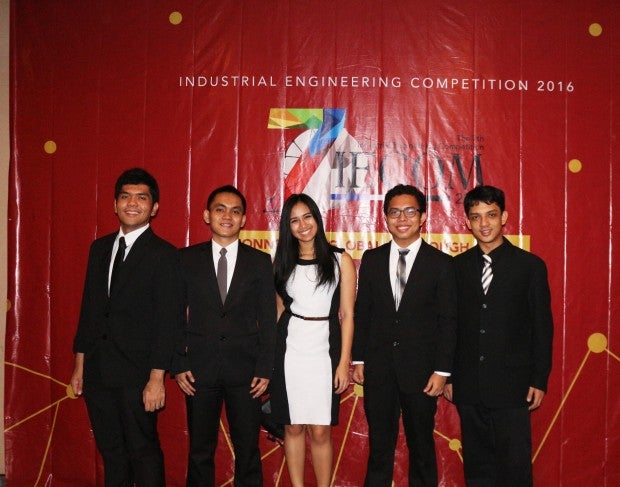 Four UP students win an international industrial engineering competition held in Bandung, Indonesia last January 9 to 17. The team is composed of (from L-R) James Renier Domingo, Daniel Roi Agustin, Arizza Ann Nocum, and Dominic Aily Ecat. They are graduating students of the Department of Industrial Engineering and Operations Research of the University of the Philippines-Diliman. They are guided by their coach Simon Lorenzo (rightmost).

Four students of the University of the Philippines-Diliman emerged victorious in the 7th Industrial Engineering Competition (IECOM) among industrial engineering and engineering management students.

The team bested other students from Southeast Asia in the competition held in Bandung, Indonesia, from January 9 to 17.

“It was an incredible opportunity to represent the university and the country, and we are so happy to bring honor to our department – especially the professors who have taught us so well,” Nocum said.

The four graduating students were handpicked by DIEOR to compete for IECOM. Out of 78 teams from Southeast Asia, only 15 teams passed the first selection stage – which was held online – to proceed to the semifinals in Indonesia.

During the semifinals, competing teams passed through an intensive three-day challenge composed of a quiz bee, an amazing race, and a simulation case challenge provided by a company. The semifinals culminated in a presentation to a board of judges composed of professionals, the academe, and company management.

After the semifinals, only five teams moved up to the finals. Aside from the UP team, other teams were from Universitas Indonesia, Institut Teknologi Bandung, Chulalongkorn University, and Universitas Gadjah Mada.

The final stage of the competition was designed to challenge students not only based on their theoretical knowledge but also on their analysis and creativity in coming up with solutions.

“We were given four days to study and solve the problems of two of the biggest Indonesian companies – Unilever Indonesia and Toyota Motor Manufacturing Indonesia. We visited their plants and were oriented on the main problems they face, then we were given two 12-hour work days to come up with a presentation outlining our solution for each company,” Domingo, the team captain, related.

The last day of the finals saw the five finalists presenting their solutions to the executives and management of the two companies. Each presentation was succeeded by a question and answer portion designed to test even further each team’s solution. The results placed the UP team as 1st, while the two teams from Indonesia placed 2nd and 3rd.

When asked how their UP education set them apart, Ecat answered, “We were taught the right tools, but ultimately what made us win was our ‘diskarte’ approach – our ability to think outside the box.”

Aside from a trophy, the team was awarded $3,500. The winnings will be used to support contestants in future competitions of UP’s industrial engineering students. 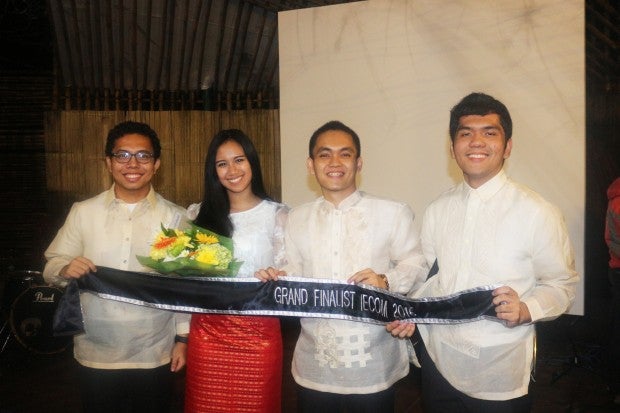 Four UP students win an international industrial engineering competition held in Bandung, Indonesia last January 9 to 17. The team is composed of (from L-R) Dominic Aily Ecat, James Renier Domingo, Arizza Ann Nocum, their coach Simon Lorenzo, and Daniel Roi Agustin. They are graduating students of the Department of Industrial Engineering and Operations Research of the University of the Philippines-Diliman.

The team was guided by their coach, DIEOR instructor Simon Lorenzo.

IECOM was organized by Institut Teknologi Bandung (ITB), the oldest technology-oriented university in Indonesia. Prominent graduates of ITB include Sukarno, the first president of Indonesia.

Engineers create a world of difference