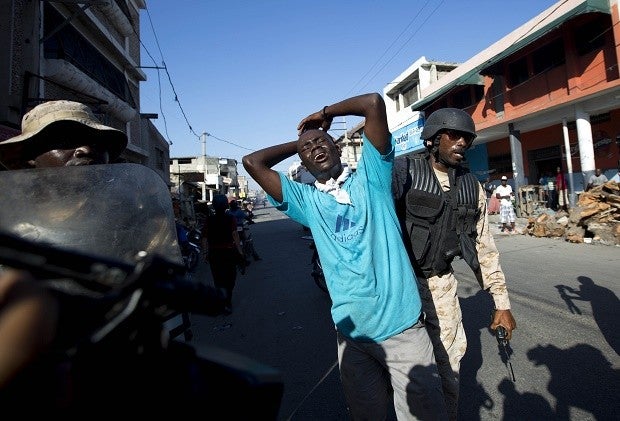 A man is detained by the national police during a protest against President Michel Martelly’s government to demand the cancellation of the Jan. 24, elections, in Port-au-Prince, Haiti, Tuesday, Jan. 19, 2016. Disputed election results have brought paralyzing street protests and many broad accusations of electoral fraud from civil society and opposition groups. AP

PORT-AU-PRINCE, Haiti — Haiti’s outgoing leader insisted Thursday that a presidential runoff will be held as scheduled this weekend, regardless of a boycott by the opposition candidate and deep suspicion of electoral fraud.

“They want to take power but not through elections,” said Martelly, appearing alongside Prime Minister Evans Paul.

Martelly, who is constitutionally due to leave office on Feb. 7, asserted that a transitional government would be a debacle for Haiti, which is still struggling with a highly uneven recovery from a devastating 2010 earthquake.

“Our (international) partners are clear: They are not going to recognize a transitional government,” he said, adding that there needs to be confidence in the stability of Haiti’s political system to help attract investment and jobs.

US Ambassador Peter Mulrean said in the absence of an agreement between Martelly’s administration and the opposition Washington “doesn’t see any other option but to complete the process as currently planned.” The US has contributed over $30 million to this three-round election cycle in Haiti.

In a phone interview with The Associated Press, Mulrean said Haiti would move into “unchartered territory” after Feb. 7 without an elected president in place.

Martelly hinted that the Sunday runoff could still be postponed if the opposition makes compromises he did not specify: If “there was a will by everyone to put a solution on the table, we would have postponed it already.”

If the runoff were to be postponed for a second time, there are calls in some quarters to keep Martelly in office until May 14 – the anniversary of the day he took office five years ago – to avoid having a transitional government in power while elections are resolved.

On Wednesday, Martelly met with officials including the president of the Senate, which had just issued a non-binding resolution calling for a halt to the elections. He was due to give a national address late Wednesday, but that speech was scrapped.

Patrick Elie, a defense minister under former President Jean-Bertrand Aristide, said he believed the election mess has the country on the edge of serious turmoil. He put the blame for what he described as “mock elections” on Martelly’s administration.

“Haiti is heading for trouble. Once the government’s candidate is elected — and he will be because the people don’t have any choice — there will be tremendous opposition,” Elie said.

Sunday’s presidential runoff pits government-backed candidate Jovenel Moise against opposition contender Jude Celestin, who is boycotting the vote although electoral officials have said his name and photo will still appear on ballots. Six senators and 25 deputies are also set to be elected.

Celestin has rejected the official results from an Oct. 25 first round as a “ridiculous farce,” and other opposition figures and civil society groups have alleged fraud, helping lead to postponement of the runoff initially scheduled for Dec. 27. But he never officially withdrew from the race as he called for electoral reforms to be adopted.

Haiti’s prime minister said street demonstrations would be banned starting Friday evening as authorities prepare to hold balloting. There have been a series of sometimes violent protests in sections of Haiti’s capital and elsewhere in the country some election offices have been burned.