It was an unwelcome, albeit expected, close encounter with the “25th senator.”

Lawyer Jessica Lucila “Gigi” Reyes Thursday confronted this reporter apparently over the mention of her clutching a luxury Goyard handbag and wearing Tory Burch designer shoes when she attended the start of her trial for plunder in the Sandiganbayan on Wednesday.

Reyes, 53, the longtime senior aide of Sen. Juan Ponce Enrile, appeared to be looking for me as soon as she was led by her security escorts from the Bureau of Jail Management and Penology (BJMP) out of the courtroom of the Third Division after the three-hour hearing.

“Yes? Yes?” an agitated Reyes said repeatedly while this reporter was taking photographs of her.

As she was walking down the stairs, Enrile’s former chief of staff handed over her pricey bag to one of the female BJMP personnel as if she was her personal assistant. Reyes was also seen looking for somebody.

When Reyes,  who was often referred to as the “25th senator” because of the influence she  wielded when her 91-year-old boss was the Senate President, noticed me on the other side of the stairs, she immediately walked toward me.

One of the jail guards, who was carrying the handbag for her, tried to stop her, but Reyes just shoved her  aside.

“Yes? Yes?” she again told this reporter, raising her voice as if challenging me to a fistfight.

During the commotion, a man wearing a black polo shirt walked up the stairs asking, “Are you Marlon Ramos?”

When I answered in the affirmative, the man went up to me, grabbed my left arm and accosted me about my report that was published on the front page of the Inquirer Thursday.

“You even wrote about the bag? Why do you have to include that in your story? You’re from the Inquirer,” the man said in a mix of English and Filipino while holding my left arm.

“Yes, exactly, sir. I’m from the Inquirer. Was there something wrong about it? Isn’t it true that she had that bag? Did I lie?” I told the man.

He only stopped when one of Reyes’ lawyers, Basco Tagarda, pacified him.

The Inquirer later learned from the court security personnel that the man was Reyes’ younger brother, Patrick Jean Gonzales.

One of the security staffers of the Sandiganbayan said he did not ask the man to register his name in the logbook because he was an immediate family member of an accused attending trial.

Moments before the hearing, I jokingly told one of the justices that I was expecting the article to get on Reyes’ nerves. I told him that Reyes might also confront me. 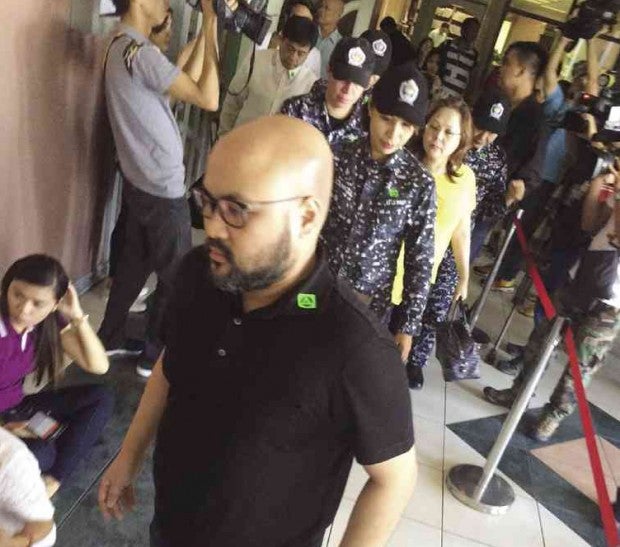 GUARDIAN OF GOYARD BAG? Neal Jose Gonzales walks ahead of his sister, Jessica Lucila “Gigi” Reyes (in yellow, background), former chief of staff and coaccused of Sen. Juan Ponce Enrile in the P10-billion pork barrel scam case being heard by the Sandiganbayan, on Thursday. Gonzales accosted the Inquirer reporter during the second day of the hearing and berated him for mentioning Reyes’ expensive Goyard bag in a previous story. MARLON RAMOS

I was right. But I did not expect it to be that brazen.

In a country where journalists are being silenced—literally and figuratively—for practicing their profession, I thought it would be wrong for me to just play down Thursday’s incident.

For such display of arrogance of the powers-that-be had led to the cycle of impunity has threatened the independence of what is touted to be the freest press in Asia.

Reyes has been locked up in a BJMP jail in Camp Bagong Diwa in Bicutan, Taguig City, for her  alleged role in the P10-billion pork barrel scam, since 2014.

But her detention for nearly 18 months over the worst corruption scandal to hit the country had not affected her fashion sense, or her sense of entitlement.

Mercifully, the whole uncomfortable episode Thursday lasted only a few minutes and the close encounter wasn’t exactly that of the Steven Spielberg, life-changing variety.