Cagsawa Ruins near Mayon to get a face-lift 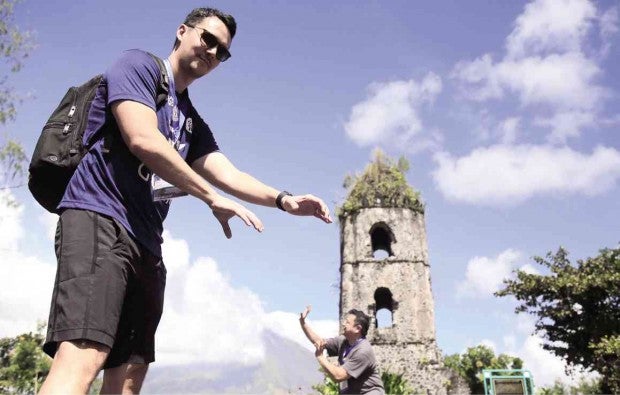 TRICK SHOT Tourist guides in the Cagsawa Ruins in Daraga, Albay province, take “trick shots” of visitors like this one for their souvenir poses. MARC ALVIC ESPLANA / INQUIRER SOUTHERN LUZON

DARAGA, Albay—The Cagsawa Ruins, a popular tourist destination here that is as iconic as the enchanting Mayon Volcano in Albay province, will soon undergo a face-lift meant to protect, preserve and promote the treasured piece of history.

The Cagsawa Ruins, situated 11 kilometers from the foot of Mayon and 8 km from the provincial capital of Legazpi City, is what is left of a Franciscan church built in 1724, believed to have been destroyed when the volcano erupted in 1814.

Some 1,200 people were killed as ash and other volcanic materials buried much of the surrounding areas, including the then Cagsawa town. Today, only the belfry and some parts of the church’s convent remain.

The Cagsawa Ruins was recently declared a national cultural treasure, joining two other centuries-old landmarks in Albay—the Church of Our Lady of the Gate, also in Daraga, and the Saint John the Baptist Church in Tabaco City.

It is considered a historical landmark that best depicts the local people’s good traits—resilient, determined, passionate and fun loving, said Maria Ong Ravanilla, regional director of the Department of Tourism.

Some 350,000 foreign and local tourists visit the area every year, she said.

Pacres said the DOT’s Tourism Infrastructure and Enterprise Zone Authority (Tieza) had approved the release of P35 million for the construction of structures and facilities that would improve the vast landscape of the historical treasure.

The municipal government, on the other hand, set aside P2 million for the preservation works, including a structure to cordon off the ruins and prevent visitors from getting too close.

The provincial government of Albay will also give P5 million, mostly for restoration works, Pacres said.

She said the makeover project had been bidded out and implementation would start this year. Designs for the existing structures have to be redone because these were “too modern and don’t match with the ruins landscape,” she added.

The new structures would include a visitor center, function hall, water and electrical facilities, and concrete fence.

Gov. Joey Salceda said the Albay History and Culture Unit would take charge of the “conservation” vision for the Cagsawa Ruins and would work with the United Nations Educational, Scientific and Cultural Organization (Unesco) for its recognition as a Unesco World Heritage Site.

On Dec. 23, 2015, National Museum of the Philippines Director Jeremy Barns announced on the agency’s website that the ancient church ruins had been named a national cultural treasure for its landmark role and significance in the richness of the country’s cultural heritage.