Pangasinan translation of Bible for the young 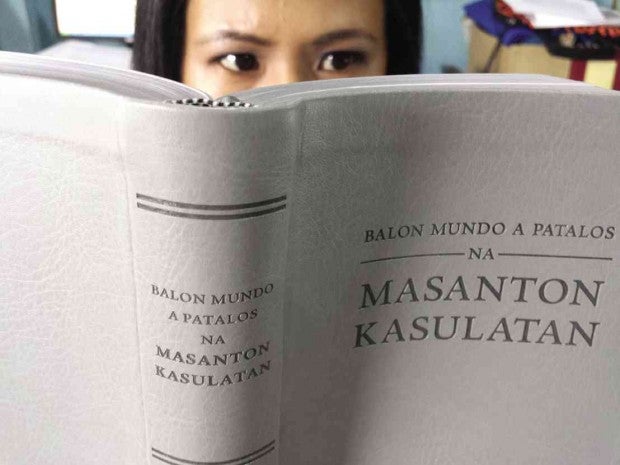 MANGALDAN, Pangasinan—How do you encourage the postmillennial generation of Pangasinenses to read the Bible in their mother tongue?

Linguists and historians have expressed fear that the Pangasinan language, spoken by over 2 million people, would become extinct as many youth prefer to speak and read in Filipino and English than their own language.

But parents, like Benjamin Caberto Sr. of Barangay Salay in Mangaldan town, believe that if the translation uses modern words and expressions common to people, then children could be encouraged to read in their native tongue.

More than 10,000 copies were distributed for free at the annual Bible conventions of Jehovah’s Witnesses last Dec. 11 in Lingayen town and in Dagupan and San Carlos cities.

The goal is to make the Bible more understandable and easier to read, said Dean Jacek, spokesperson of Watch Tower Bible and Tract Society in the Philippines Inc.

The launching came after the country celebrated the 100th anniversary of the “Say Santa Biblia a niluganan na saray masagrado a Libro ed Daan tan Balon Sipan,” the first translation of the Old and New Testaments into the Pangasinan Bible, published by the Philippine Bible Society in 1915.

“The first edition of the New World Translation came out in 1950. What Pangasinan-speaking people are using now is different from what was used in the 1950s. Some of the terms used, especially by the young ones, have changed. Jehovah’s Witnesses saw the need to attune the Bible to the language which people today are more familiar,” Jacek said.

Jacek cited the word “banwa,” or sun, in English. The word “agew” is more popularly used by many people in Pangasinan so the latter was selected as a more current, or better, translation for the word sun, he said.

“Keeping in mind that Pangasinan is considered as spoken language and that many native speakers are not used to reading Pangasinan literature, the translators put forth earnest effort to ensure that the thought of English is conveyed in a way that is appealing to the Pangasinan-speaking audience, regardless of their age or background. This involves carefully selecting terms and expressions that are simple, easy to read and understood even by the common, ordinary people,” he said.

For five years, the six-member translation team collaborated with selected readers living in different parts of the Pangasinan-speaking region.

As a result, an easy-to-read and easy-to-understand translation was produced.

“Clarity, accuracy and naturalness were maintained in rendering the revised English NWT into Pangasinan, so all of our local readers can accurately learn the Bible’s message in their own tongue. Archaic words and expressions were avoided to maintain naturalness and readability in this translation,” Jacek said.

The “Balon Mundo a Patalos” is now available for download online for free at http://www.jw.org/pag/publikasyon/biblia/.