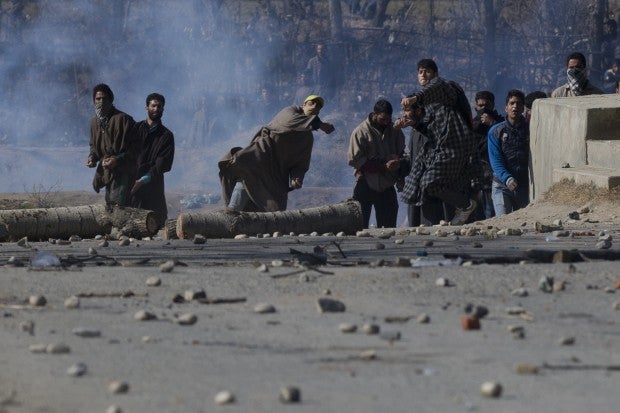 The protesters were angry that Indian government forces killed a suspected rebel in a gunbattle Wednesday after they had surrounded the village of Naina on a tip that anti-India militants were hiding there, said police officer Nitish Kumar.

Chanting pro-independence slogans, scores of youths hurled rocks at government forces during protests in Naina and in neighboring Batpora village.

Police tried to quell the protests by firing gunshots and tear gas into the air, but protesters torched an armored police vehicle, Kumar said. Government forces then fired on the protesters, killing one man and wounding two others, according to witnesses.

Inspector-General Syed Javaid Mujtaba Gillani confirmed that a civilian had been killed and said the two men injured were hospitalized and in stable condition.

He said the gunbattle had destroyed a home in Naina, and authorities were searching the debris for the body of a second militant believed to have been killed.

Anti-India sentiment runs deep in Kashmir where rebels have been fighting since 1989 for the region’s independence or merger with Pakistan, which controls another portion of the disputed Himalayan territory in the west.

More than 68,000 people have been killed in the conflict. The rebel groups have largely been suppressed by Indian troops in recent years, and resistance is now principally expressed through street protests.