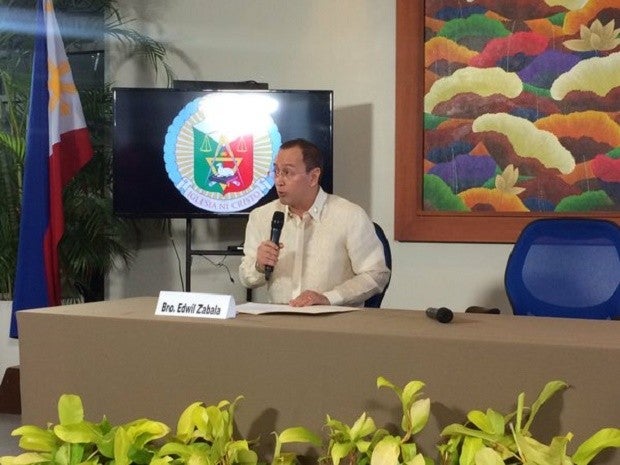 The Iglesia ni Cristo is conducting its own investigation into the events leading to the arrest of its former member Lowell Menorca, according to spokesperson Edwil Zabala.

Menorca, arrested by police at Quirino Avenue corner Roxas Boulevard on Wednesday morning, was on his way to a scheduled hearing at the Court of Appeals for his petitions for writs of amparo and habeas corpus against INC leaders.

In a press briefing on Wednesday, Zabala denied the claims of Menorca that the INC had a hand in the arrest because they did not want him to testify.

“We were dumbfounded upon learning that our name is again being besmirched by Mr. Menorca,” he said.

He said their legal team was fully prepared for the hearing and waiting for Menorca to appear in court.

Zabala added that the arrest warrant issued this morning was “beyond the control of the complainants since that was dependent on the police finding the opportunity to serve it.”

Menorca may have made defamatory statements against some INC members who were part of the organization’s medical and rescue units, said Zabala.

“The members of SCAN international heard or saw the interview by Menorca where he was accusing them of illegal activities so they filed a case.”

Zabala also clarified that Menorca was not a minister of the influential church.

“To say that he is an ex-minister is wrong. He was a student in the ministry. Hindi pa sya naging ministro,” he said. CDG/RC