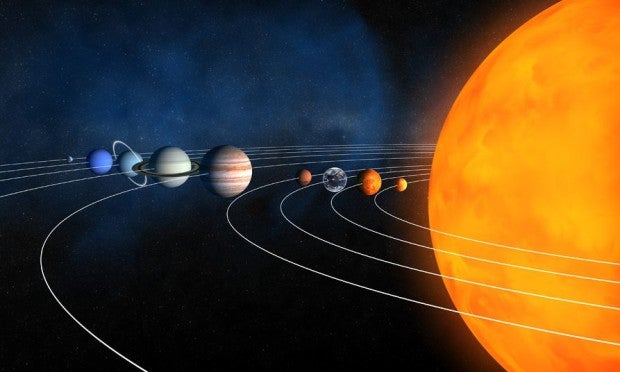 A “VERY rare” celestial treat awaits those who will look at the sky before dawn, as five planets are lined up in the sky starting this week.

The planets Jupiter, Mars, Venus and Saturn have been visible above the east southeastern horizon since Jan. 1.

But Mercury will soon join them for a rare planetary conjunction that last occurred 11 years ago, according to the Philippine Atmospheric Geophysical and Astronomical Services Administration (Pagasa).

In the Philippines, the five planets will appear in an uneven line stretched across the east southeastern horizon from Jan. 22 to March 3, according to Pagasa astronomer Jose “Pepe” Mendoza.

The celestial parade will be best seen under dark and clear sky conditions about an hour before sunrise, when all the five planets have already risen, Mendoza said.

By March, Mercury will no longer be seen in the sky although Jupiter, Mars, Saturn and Venus will appear together longer, he said.

“Starting Jan. 1 a conjunction of four planets (Jupiter, Mars, Venus and Saturn) will be observed above the east southeastern horizon. The planets will be good astronomical targets for astrophotography and telescoping sessions during the month,” Pagasa said in an advisory.

“Mercury joins the group of planets during the middle of the month, making it a very rare and spectacular display of planetary conjunctions since 2005,” it added.

Mario Raymundo, chief of Pagasa’s astronomical observation unit, said it was technically not correct to call the event a planetary alignment, but a conjunction of planets.

Planets appear in the sky two or three or four at a time every now and then, he said.

While astrologers interpret the planetary position as astronomy and astrophotography enthusiasts savor the treat of observing five planets at the same time, astronomers insist that the phenomenon’s significance is limited to the skies.

“Enjoy the celestial parade. But it has no effect whatsoever on Earth,” Raymundo said.

He said the planets could be seen best away from city lights, preferably on a beach with an unobstructed horizon under clear, dark skies.

“Looking at the eastern sky, they appear aligned,” he said.

Raymundo said Jupiter would rise first in the evening sky. Mars will rise a couple of hours after midnight, followed by Saturn then Venus a few hours before sunrise.

Mercury will rise minutes before sunrise.

The planets can be seen by the naked eye but they are best viewed through a telescope.

Mendoza said the “grand conjunction” of planets would occur 24 years from now, on Sept. 10, 2040 when the five planets will appear close together in the sky.

Unfortunately, he said, it would occur during daytime in the Philippines.