Osmeña: If JPE has proof, that will hurt Aquino
By: Jerry E. Esplanada, Leila B. Salaverria - @inquirerdotnet
Philippine Daily Inquirer / 12:06 AM January 20, 2016 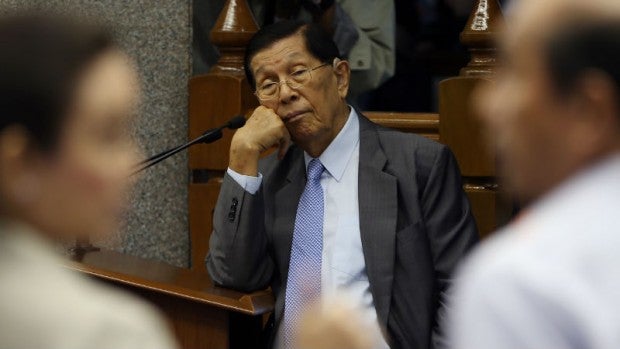 THE CLAIM of Senate Minority Leader Juan Ponce Enrile that President Aquino knew Special Action Force (SAF) commandos were being slaughtered in Mamasapano, Maguindanao province, in clashes with Moro fighters but did nothing about it could be “deadly” to the President if supported by evidence, Sen. Sergio Osmeña III on Tuesday said.

“[I]f Manong Johnny can prove that, it’s going to be very deadly. That’s going to hurt the President,” Osmeña said.

In open plenary session on Monday, Enrile said he had evidence Mr. Aquino was actively involved in planning the Mamasapano operation to neutralize three foreign terrorists led by Malaysian Zulfiki bin Hir alias “Marwan” and that the President was monitoring developments as they unfolded while his plane was on its way to Zamboanga City.

The President also supposedly knew the SAF troopers were being killed but did not act to help them, the Senate minority leader said.

Asked about Enrile’s claim, Presidential Communications Secretary Herminio Coloma Jr. noted that Mr. Aquino had “said that he had done what a President and Commander in Chief should do.”

Earlier, Coloma pointed out the President had “discussed the issues regarding (Mamasapano) several times in his public addresses last year, including the Jan. 28 and Feb. 6 press conferences in Malacañang; the March 9 interfaith prayer gathering, also in Malacañang; and the March 26 Philippine National Police commencement exercises in (Silang) Cavite.”

Coloma reiterated that the Aquino administration “at all times, has been open and forthright” about it.

Malacañang, he said, was ready to answer all questions pertaining to the tragedy “if and when these are asked at the proper forum.”

To those saying that his attempt to pin down the President was politically motivated, Enrile Tuesday urged them to wait for the questions he would raise at the hearing.

Enrile said he had witnesses volunteering to testify on Jan. 27 in the new inquiry into the Mamasapano incident. But he said he did not want them to go to the hearing anymore as his evidence was more than enough.

“I don’t need them,” Enrile said of the witnesses.

But he declined to give details on the evidence he had on the accusations he made against the President. “If I were playing poker, I would not show you my card,” he said.

Osmeña said Enrile was looking to hurt the President with his move to reopen the Senate inquiry into the Mamasapano incident, in retaliation for his being detained over the alleged pocketing of pork barrel funds.

He said Enrile’s move had a political color, but was not being done to favor any particular candidate.

“I don’t think Johnny [Enrile’s nickname] cares too much about that. He just cares to hurt P-Noy because P-Noy put him in the stockade, that’s why. I don’t think he’s doing it in favor of anybody,” he told reporters in an ambush interview.

Enrile was one of three senators detained for plunder for allegedly pocketing their pork barrel funds. The Supreme Court later granted Enrile bail on humanitarian grounds, citing the frail health of the 91-year-old lawmaker.

He promptly returned to the Senate after his release.

He was detained at the Philippine National Police General Hospital when the Senate first held its inquiry into the Mamasapano incident. He denied that his request to reinvestigate the Mamasapano clash was politically motivated.

But whatever the motive, Enrile’s revelations, if they turn out to be true, could be detrimental to Mr. Aquino, said Osmeña.

The Mamasapano incident triggered one of the worst political crises to hit the Aquino administration and was detrimental to Mr. Aquino’s ratings. It also derailed the Bangsamoro bill, which was a key piece of the government’s peace deal with the Moro Islamic Liberation Front.

Osmeña did not think Mr. Aquino should face the Senate to answer questions.

“I think because of the dignity of his office, we don’t want him subjected to that,” he said.

He said the President could allow himself to be videotaped answering questions, similar to what former US President Bill Clinton did when he was accused of having intimate relations with someone other than his wife.

Sen. Gregorio Honasan II Tuesday said the new inquiry should clarify the issue of chain of command to prevent a repeat of the incident.

Honasan said the Mamasapano incident “revolved on one central issue” and that was the chain of command.

“It’s not an idea or concept but is an institution, a time-honored tradition that defines responsibility, accountability and command and control,” he said at a breakfast forum at Kamuning Bakery in Quezon City.

He said that if the chain of command was not clarified in the Jan. 27 hearing of the Senate committee on public order, “this (kind of incident) will happen again.”

“If every time we serve a warrant of arrest and 44 young men will die and we did not address this deficiency of implementation either in the law or the chain of command… we might have many dead and that is not acceptable to me,” said Honasan, vice chair of the committee.

He said while Enrile wanted to pinpoint responsibility in the incident, he, on the other hand, wanted to focus on the “institutional damage” resulting from the incident.

Honasan is a former lieutenant colonel who led several coup attempts against the administration of President Corazon Aquino.