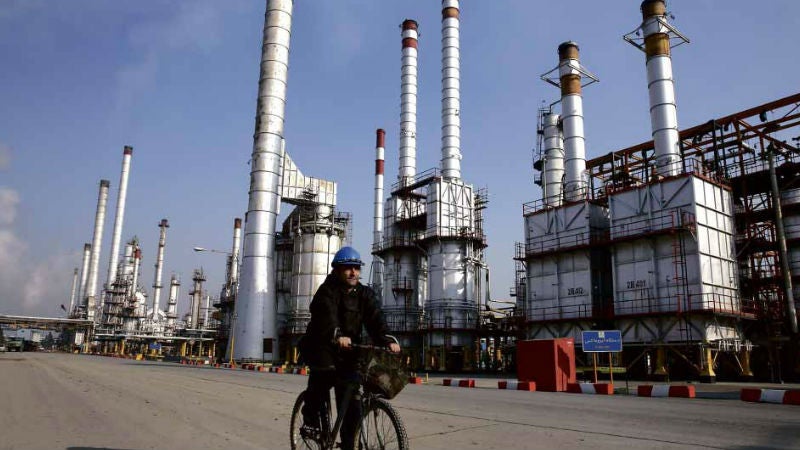 THE FREE fall in global oil prices is like manna from heaven for an oil-importing country like the Philippines, as it makes fuel prices easy on the pocket for motor vehicle owners, public transport operators and other utilities.

But the prolonged global oil price slump has started to worry economists because this could result in a drop in remittances of up to $2 billion a year from Filipinos working in the Middle East.

Monday saw the Brent crude briefly falling below $28 a barrel after Western sanctions on Iran were lifted, allowing the country to resume oil exports. The last time Brent closed below $28 was in November 2003.

The drop in oil prices is like a “double-edged” sword, said Jun Neri, an economist at Bank of the Philippine Islands (BPI).

Neri said that if oil prices based on Brent and West Texas Intermediate crude benchmarks would remain low but at least within the $40 to $50 per barrel level, the Philippines would be a net beneficiary.

“If it falls to $20 per barrel, we think the downside is bigger than the upside for the local economy because of the Middle East remittances,” Neri said.

On the bright side, the steep fall in fuel prices has translated into lower costs of production, transport, logistics and electricity, said Melita Obillo, officer in charge for the Oil Industry Management Bureau at the Department of Energy.

Oil firms in the country Monday announced significant price reductions to reflect the declining prices in the global oil market.

“The lifting of the sanctions on Iran contributed to another fall in oil prices across the board (crude and finish products). Even a resumption of such an oil sanction may have little effect… . If Iran resumes exports, for sure, it will add to the glut, which is good for importing countries like the Philippines [as this means] lower transport and manufacturing costs as well as decrease in power costs for those using diesel and bunker,” said Eastern Petroleum chair Fernando Martinez.

The prolonged downturn in oil prices, which is in turn escalating pressure on Saudi Arabia to abandon a 30-year-old peg of its currency to the US dollar, may pose greater risks to the deployment of Filipino overseas and their remittances than the recent diplomatic rift with Iran, Citigroup economist Jun Trinidad said in a research note.

Trinidad said the Philippines could lose $400 million to $2 billion yearly if remittances from overseas Filipino workers (OFWs) were cut by 10 to 50 percent as a way to assess the impact of such risk in the Middle East.

A depegging of the riyal from the US dollar, seen by analysts as among the potential “black swan” or an unpredictable event in 2016, could curb the decline in Saudi Arabia’s foreign reserves.

If the depegging happens, other Middle Eastern states may do the same to their respective currencies, according to Citi.

If that happens, the value of remittances from the Middle East—currently 22.7 percent of the total—would decline but hopefully would be mitigated by flows from North America and Asia, Citi said.

“A prolonged decline, say from $10 to $15 a barrel levels for more than 24 months, puts OFW remittances from the Middle East at risk, making this a medium-term risk issue,” Lacson said.

US-based think tank Global Source said the Philippines was understandably concerned about the fate of its 2.5 million overseas workers in the Middle East, a large number of whom are based in Saudi Arabia.

“Filipinos who are either doing business or working there are particularly worried because construction projects and work contracts have now been put at greater risk,” economists Romeo Bernardo and Marie-Christine Tang said in a research note dated Jan. 7.

Remittances from Saudi Arabia continued to rise in 2015 although at a much slower pace of 6 percent in the first 10 months. In the past two years, annual remittances from the country surged by double-digit levels to reach over $2 billion in 2013 and $2.5 billion in 2014.

“With [Saudi Arabia’s] budget shortfall constraining infrastructure investments, and an announced policy to cut reliance on foreign workers, the likelihood of continuing remittance growth has dimmed considerably,” Global Source said, citing anecdotes about firms with operations in the country beginning to suffer some delay in payments.

“Indeed, it would be a challenge for the 1 million or so Filipino workers in [Saudi Arabia] to keep their jobs and remit the same amount this year. Most at risk are construction workers with lapsing contracts that may not be renewed, while professionals, e.g., health-care workers, are facing the risk of taxation and reduced net pay. Likely the least exposed are household workers, who earn less comparatively,” Global Source said.

With limited job opportunities in the Middle East, Citi’s Trinidad said more overseas Filipinos could crowd the onshore job market, which may find it difficult to absorb disruptions in overseas deployment.

“Other foreign labor markets will be looked at but won’t be as accommodating with the global downturn coupled with risk of skill set-opportunities mismatch. Risk of an OFW deployment cut by 100,000 to 200,000 in [the Middle East] that elevates the jobless rate by 0.1 percent to 0.4 percent implies less remittances in support of consumption,” the economist said.

But while the risk to Middle East-based workers and remittances rose recently, the number of migrant Filipinos in North America and their remittances were bigger than those of OFWs in the Middle East, Trinidad said.

When overseas remittances fell sharply in October and November, Neri said the suspicion was that a big portion reflected the slowdown in the Middle East arising from the slump in oil prices.

“If it continues to be depressed in 2016, we think that the downside in oil will be much stronger than whatever benefit local consumers get from being able to allocate a bigger share of the budget for things other than petroleum products,” Neri said.

Asked how the Philippines could manage such risks from the Middle East, Neri said BPI was hoping that Iran’s return to the global oil market could open up new job opportunities in the new market six to nine months down the road when all of the sanctions shall have been lifted.

“It can be considered a blessing in disguise because we’ve been too dependent to some extent on OFW funds to keep our economy afloat. So this could be a chance for us to take the necessary steps to put in the necessary reforms to make ourselves less dependent on remittances—and in fact generate domestic employment that will also provide as much as foreign currency for our country,” Neri said.

One structural adjustment needed would be to make the local private sector more competitive by building much-needed infrastructure.

Aside from this, Neri said the country would need to have a more competitive currency.

“One natural consequence if remittances contract is that the peso will need to depreciate a little bit more,” he said.

Asked about estimated losses in remittances, Neri said if the entire 40-percent remittance flow from the Middle East contracts significantly, the $2-billion estimate was possible.

“Not even the growth in outsourcing could compensate for that,” Neri said.

“The continued decline of crude oil prices should be a positive for the economy because of the corresponding impact on fuel prices and consumption. However, for that to happen on a broad scale, the government has to roll back public transportation fares—something that has a low probability over the next six months because of the elections,” said Lacson of Campos, Lanuza & Co.

Read Next
Pols terrorizing island town in Sulu
EDITORS' PICK
Metro Manila’s COVID-19 cases on downward trend, but surge not over — OCTA
House energy committee chair Arroyo bats for cheap electricity
Unleash the photographer in you this World Photography Day with vivo smartphones
Palace warns sugar hoarders after raid on Pampanga warehouse
Look Through: The fate of impounded stray dogs
What to watch out for when selecting a video surveillance solution
MOST READ
Man abducted in Batangas gasoline station, found dead in Quezon
Nica del Rosario to wed partner in Australia
Palace warns sugar hoarders after raid on Pampanga warehouse
Lawyer who gets P20K worth of no-contact apprehension penalty seeks SC help
Don't miss out on the latest news and information.