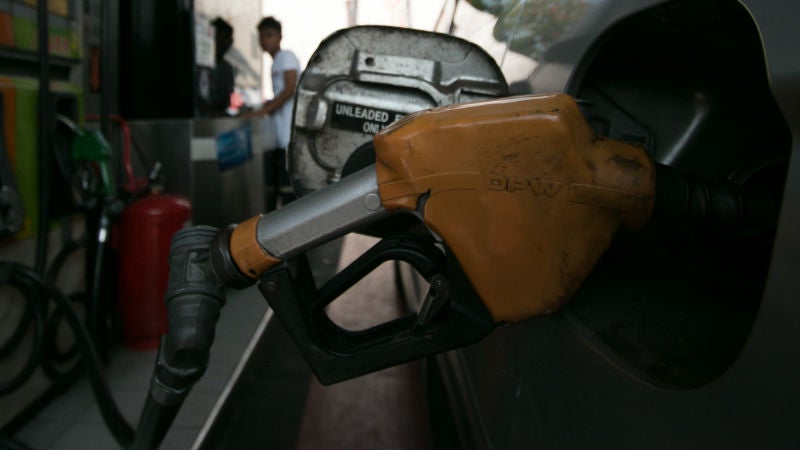 LOWER GAS PRICES A vehicle’s tank is filled with gas at a station in Quezon City as petrol owners begin to lower gas prices. ALEXIS CORPUZ

IN AN UNEXPECTED but welcome move, a transport group, not a consumer group, has called for a 50-centavo reduction in the jeepney minimum fare of P7.50 in Metro Manila and nearby areas.

Efren de Luna, Alliance of Concerned Transport Organizations (Acto) national president, said his group was proposing a rollback of 50 centavos—collecting P7.00 instead of P7.50 for the first 4 kilometers to benefit passengers.

The transport group’s call came amid the continual decrease in fuel prices in the country in the wake of falling prices in the global oil market.

Monday saw the Brent crude briefly falling $28 a barrel after Western sanctions on Iran were lifted, allowing the country to resume oil exports. The last time Brent closed below $28 was in November 2003.

Starting today, Pilipinas Shell Petroleum Corp. and Petron Corp. are cutting prices of gasoline by P1 per liter, kerosene by P1.25 a liter and diesel by P1.45 a liter.

Independent player Eastern Petroleum Corp. implemented on Monday its price rollback of P1.50 a liter for diesel and P1.10 per liter for gasoline.

Before the latest round of price cuts, diesel was retailed at an average of P20.50 a liter and gasoline at P38.10 a liter.

In a text message to the Inquirer, De Luna said Acto was also calling on the Department of Trade and Industry (DTI) to lower prices of motor spare parts and commodities so everyone, not only jeepney operators, would experience the effects of reduced fuel prices.

Winston Ginez, chair of the Land Transportation Franchising and Regulatory Board (LTFRB), said the agency welcomed the Acto proposal.

Ginez said he would call a meeting with public transport groups to expedite the discussion on the Acto proposal instead of waiting for the next LTFRB hearing scheduled for Feb. 10 regarding the fare reduction proposed by Negros Oriental Rep. Manuel Iway.

Iway, in his original petition in 2014, asked the LTFRB to reduce the minimum jeepney fare from P8.50 to P8 for the first 4 kilometers and the succeeding kilometer rate from P1.50 to P1.40 based on the drop in diesel prices.

Iway noted that the LTFRB had approved the 50-centavo fare increase in jeepney fares last June based on a P44 per liter price of diesel.

He also pointed out that Cebu jeepney operators and drivers appeared to be thriving despite having a minimum fare of P8.

George San Mateo, national president of Pinagkaisang Samahan ng Tsuper at Opereytor Nationwide (Piston), welcomed the rollback proposal, saying he is amenable to the proposed reduction in the minimum fare from P7.50 to P7.

“Hindi kami maramot sa mananakay (We are not stingy when it comes to our passengers). We are in favor of decreasing the minimum fare to P7.00,” he said.

San Mateo, the head of Piston’s 200,000 members, said the group was also pushing for a rollback in prices of basic commodities and services, including water and electricity, as well as social services.

“This is our wish and not a precondition for the rollback,” he said.

Eastern Petroleum chair Fernando L. Martinez said Iran’s resumption of exports would add to the global supply glut, which will be good for importing countries like the Philippines as this will translate into lower transport, manufacturing and power costs.

“No wonder we have lower inflation now and last year, as we hit the 2003 price level of Dubai crude at $26.42 a barrel,” Martinez said.

While this development bodes well for companies in the country, there is a need to ensure that the savings will reach consumers through reductions in the prices of consumer goods and the costs of services, transport and power, according to Martinez.

Martinez said he was supporting the DTI’s appeal for a rollback in the suggested retail prices (SRPs) of basic necessities and prime commodities to reflect the decrease in diesel and fuel oil prices. 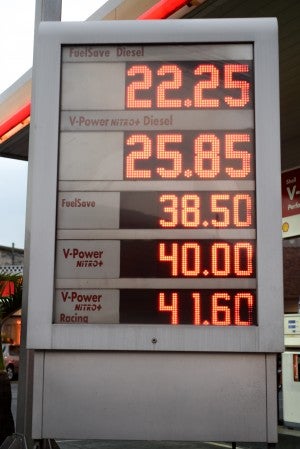 STILL GOING DOWN The lifting of Western sanctions against Iran has helped further push down global fuel prices, as it is expected to restart selling oil to the world market and further increase the supply glut. Prices at a Makati City gas station have yet to reflect the new round of price reductions of P1 to P1.10 per liter for gasoline and P1.45 a liter for diesel. The reductions take effect today for Pilipinas Shell and Petron. ELOISA LOPEZ

Data from the Department of Energy showed that in 2015 retail prices of diesel declined by 25.81 percent, fuel oil by 13.12 percent and liquefied petroleum gas (LPG) by 4.27 percent.

In 2015, the DTI observed that price reductions in selected brands of basic goods such as bread, coffee, flour and milk were due to the lower cost of raw materials and not to the decline in fuel prices.

“It is high time to pass on to the consumers the savings incurred by the manufacturers, distributors and retailers of basic and prime goods from lower transportation and distribution cost by reducing their prices,” Trade Secretary Adrian S. Cristobal Jr. said.

The drop in prices of petroleum products can translate into a reduction in SRPs of basic and prime goods by 0.05 percent to 3.04 percent, equivalent to 1 centavo to as much as P26.46, according to Trade Undersecretary Victorio Mario A. Dimagiba.

As for agricultural products categorized under basic and prime goods, the DTI will meet with the Department of Agriculture to discuss the move for producers, farmers, dealers and middlemen of fresh produce, such as vegetables, fish, chicken, pork, beef and fruits to roll back their prices.