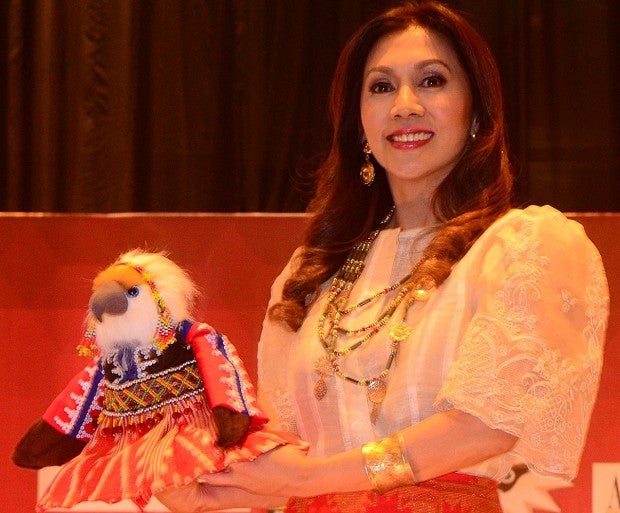 DESIGNER TOY In a Renee Salud outfit, a Philippine eagle stuffed toy is presented for auction by Jackie Garcia-Dizon, immediate past president of Hijos de Davao, to raise funds for the protection of the critically endangered bird species. JINGGOY SALVADOR/CONTRIBUTOR

DAVAO CITY—Even before the Philippine eagle stuffed toys in custom-made Renee Salud outfit were presented to the public for auction on Thursday, these had already been sold out.

But this didn’t stop guests at the Marco Polo Hotel here from pledging P10,000 for a pair of the toy birds in one-of-a-kind designer clothes.

The turnout of support surprised both the organizers and the Philippine Eagle Foundation (PEF). They are now committed to creating additional designer eagles for the donors.

Salud used authentic fabrics from the different tribes of Mindanao in creating a his and hers costumes for the 10 pairs of eagle stuffed toys.

More than owning the iconic representations of the eagle dressed by an equally iconic Filipino fashion figure, the event was aimed at protecting the feathered creature from getting plucked out of existence.

Since 1994, the Philippine eagle has been considered critically endangered by the International Union for Conservation of Nature. About 400 pairs of Philippine eagles remain in the wild, more than half of them in Mindanao, according to an estimate by PEF.

Uncontrolled hunting, loss of habitat due to forest destruction and pollution continue to be the main causes of their decreasing population.

Philippine eagles are monogamous and can lay only one egg in two years—unique behaviors that make them vulnerable to extinction.

Shortly after the presentation of the dolled-up eagles by the members of the Hijos de Davao, who were in Renee Salud as well, Marco Polo exceeded the P1-million mark in donations.

Of the amount, P750,000 was raised by the hotel chain through the fund-raising campaign in Marco Polo Davao, Marco Polo Cebu, Marco Polo Ortigas and Marco Polo Hong Kong hotels.

But the expanded program that injected a stylish twist encouraged everyone, including members of Davao’s elite, corporate guests, travel trade executives and friends from the national and local media, present in the ballroom to dig into their pockets.

With donations pouring in, the auction proved to be a success.

The fund-raising campaign was the brainchild of Philippe Caretti, Marco Polo Hotel’s vice president for operations.

Although the Marco Polo Davao has been a partner of the PEF for more than a decade and the “adoptive parent” of Philippine eagle “Marikit,” the fund-raising campaign was a welcome project for the PEF. With a report from Inquirer Research