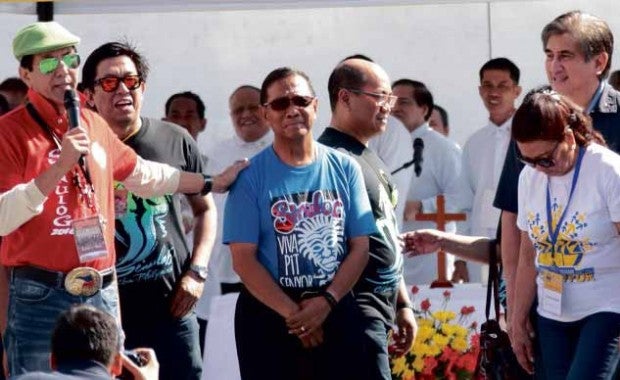 This is an updated version of an earlier story. The booing can be heard at around the 4-minute mark in the audio clip, below. TV footage from GMA also shows the exact moment when the booing grew loud. — Editors

In fact, he was booed on Sunday after he was introduced by suspended Mayor Mike Rama at the formal opening of the Sinulog Grand Parade at the center attended by close to 10,000 people.

Apparently, the jeering prompted the Vice President—who is running for President in the May elections—to cut short his speech.

“Maayong buntag sa inyong tanan (Good morning, everyone). Viva Pit Senyor!” was all Binay said amid the booing from the grandstand.

Binay’s camp said a contingent from the Liberal Party (LP) was the source of the boos.

It was not the first time Binay had a not-so-pleasant experience in Cebu, a vote-rich province with an electorate of more than 2 million.

During the Visayas launch of Binay’s United Nationalist Alliance (UNA) in October, some in the crowd were seen leaving the Cebu Coliseum while Binay was speaking.

He later said the heat in the coliseum made some people leave.

The Grand Parade was the culmination of the 10-day festivity leading to the Feast of the Holy Child Jesus on Sunday.

Thirty-two dancing contingents, 49 floats, 31 gigantes and 17 puppeteers joined the parade that started and ended at the coliseum.

Before the start of the parade, a Mass was held at the sports center officiated by Rev. Fr. Jonas Mejares OSA, rector of the Basilica Minore del Sto. Nino.

Binay and his party arrived at the center before the final blessing past 9 a.m.

They stood in a corner of the grandstand but Rama asked Binay to join him on the stage.

Boos could already be heard from a section of the bleachers. But the booing grew louder after Binay gave his short speech “mainly” to greet the crowd.

Binay and his group then went down to the media center for breakfast, consisting of tinuwang isda (fish-based soup with tomatoes and ginger), bodbod (sweet sticky rice wrapped in banana leaves), rosquillos (scallop-shaped cookies famous in northern Cebu) and bananas.

Binay then went up to the VIP section of the grandstand to watch the presentation.

Before Binay left, the Inquirer sought a comment on the booing. “I didn’t hear it,” he said.

In a statement, his spokesperson Joey Salgado said UNA heard reports the boos came from an LP contingent.

“If this is true, it’s unfortunate that they behaved the way they did. But we understand where they were coming from,” he said.

Salgado said UNA knew the LP felt bad that Binay was leading in the presidential survey, even in the Visayas. “If they cannot respect the Vice President, they should have respected the occasion,” he added.

But Ethel Natera, information officer of the provincial government, said Gov. Hilario Davide III, LP standard-bearer in the province, and some LP senatorial candidates were outside the sports center when Binay was booed.

Vice Gov. Agnes Magpale, Davide’s running mate, was on stage with Binay at the time, she added.