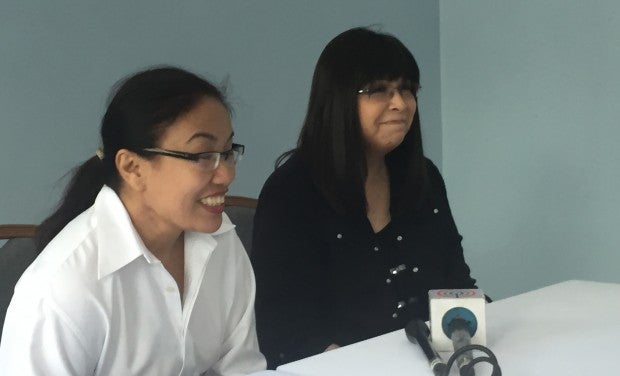 Lottie Manalo-Hemedez (right), expelled sibling of Iglesia Ni Cristo executive minister Eduardo Manalo, speaks to the media for the first time on Friday. Beside her is her lawyer Trixie Cruz- Angeles. FRANCES MANGOSING

This was the statement of Lolita “Lottie” Manalo-Hemedez, sister of Iglesia ni Cristo executive minister Eduardo Manalo, who was asked to leave the INC compound in Quezon City after being expelled last July.

Speaking to the media for the first time on Friday at a hotel in Quezon City, Hemedez insisted ownership of No. 36 Tandang Sora despite demands from the powerful church to vacate the property.

“Pag umalis it’s as though pumapayag sila sa claim na hindi kanila yun. Along with right of ownership is right of possession so they will not give up possession. They are owners,” Hemedez’s lawyer Trixie Angeles said.

Hemedez explained that her father, Erano “Erdy Manalo,” required her husband to build her a house nearby when they got married.

“So he bought a lot and built a house, which was No. 36,” she said, explaining that it was outside the central compound of the INC.

The INC on Thursday said it may file an ejectment case if the expelled Manalo siblings—Hemedez and Felix Nathaniel “Angel” Manalo—fail to leave the compound.

But Angeles said they believed that the ejectment suit would not prosper.

“We strongly believe that the ejectment suit will fail. Whether you look at the perspective of doctrine within the church, the manner of the expulsion, the character of occupancy and ownership of the property as well as the actual ownership. This is theirs,” she said.

The INC insists ownership of the compound but Hemedez said she had it under her name since 1983.

The Manalo siblings and their mother were expelled by their brother Eduardo last July after they claimed that their lives were in danger.

As to their expulsion, Hemedez said she did not go through the process of discharge.

Hemedez said she had wanted to talk to Eduardo but he was not speaking to them.

Asked what she would say to the executive minister, Hemedez said: “Sana po kausapin niya kami.”

Her brother, she claimed, had stopped talking to them for reasons she didn’t know.