Police say Jakarta attack funded by IS in Syria 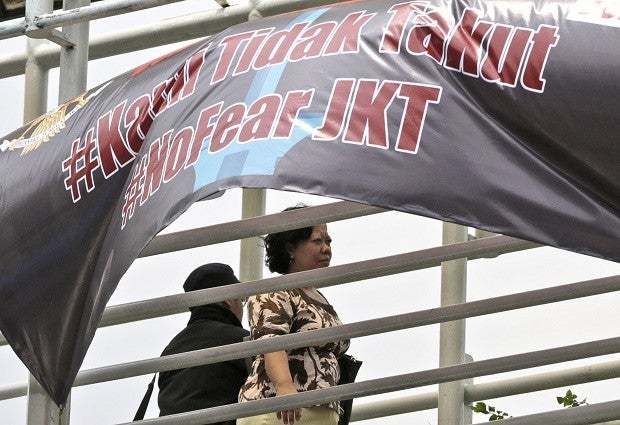 A woman walks past a banner on a pedestrian bridge with the words “We are Not Afraid” following Thursday’s attacks at the Starbucks cafe in Jakarta, Indonesia, Friday, Jan. 15, 2016. A day after attackers detonated bombs and engaged in gunbattles with police in the central part of Indonesia’s capital, Jakarta tried to get itself back on track. AP

JAKARTA, Indonesia — An audacious attack in the heart of Indonesia’s capital by suicide bombers was funded by the Islamic State group, police said Friday, as they arrested three men on suspicion of links to the plot and seized an IS flag from one of the bombers.

National police chief Gen. Badrodin Haiti told reporters that Thursday’s attack was funded by IS through Bahrun Naim, an Indonesian who spent one year in jail for illegal possession of weapons in 2011, and is now in Syria fighting for the Islamic State.

Supporters of the Islamic State group also circulated a claim of responsibility for the attack on Twitter late Thursday. The radical group controls territory in Syria and Iraq, and its ambition to create an Islamic caliphate has attracted some 30,000 foreign fighters from around the world, including a few hundred Indonesians and Malaysians.

The IS link, if proved, poses a grave challenge to Indonesian security forces. Until now, the group was known only to have sympathizers with no active cells capable of planning and carrying out a plan such as Thursday’s in which five men attacked a Starbucks cafe and a traffic police booth with hand-made bombs, guns and suicide belts. They killed two people — a Canadian and an Indonesian — and injured 20. The attackers were killed subsequently, either by their suicide vests or by police.

The attack “was funded by ISIS in Syria through Bahrun Naim,” Haiti told reporters after Friday prayers, using an acronym for the Islamic State. He did not elaborate.

He also identified one of the five attackers as Sunakim, who was once sentenced to seven years in jail for his involvement in military-style terrorist training in Aceh, but was released early.

Also Friday, police arrested three men at dawn in their homes in Depok on the outskirts of Jakarta, and more raids were being conducted in Java, Kalimantan and Sulawesi provinces based on evidence found at the scene, national police spokesman Maj. Gen. Anton Charliyan said.

“Now we can be sure that it was the action of ISIS because ISIS’ flag was found in the house of one of the suspects,” he said. “Hopefully, the group’s (other) members will be captured soon.”

In recent years, Indonesian anti-terror forces had successfully stamped out another extremist group known as Jemaah Islamiyah. It was responsible for several attacks in Indonesia, including the 2002 bombings of bars in Bali, which left 202 people dead, as well as two hotel bombings in Jakarta in 2009 that killed seven people.

Terrorism experts say IS supporters in Indonesia are drawn from the remnants of Jemaah Islamiyah.

Jakarta residents were shaken by Thursday’s events but refused to be cowed.

The area near the Starbucks cafe remained cordoned off with a highly visible police presence. Onlookers and journalists lingered, with some people leaving flowers and messages of support.

A large screen atop the building containing the Starbucks displayed messages that said “#prayforjakarta” and “Indonesia Unite.”

Newspapers carried bold front-page headlines declaring the country was united in condemnation of the attack, which was the first in Indonesia, the world’s largest Muslim-majority nation, since the hotel bombings in 2009.

Risti Amelia, an accountant at a company near the Starbucks said she was “still shaking and weak” when she returned to her office Friday. Because staff remained emotional, the company decided to send workers home, she said.

Supporters of the Islamic State group circulated a claim of responsibility on Twitter late Thursday. The message said attackers carried out the Jakarta assault and had planted several bombs with timers. It differed from Indonesian police on the number of attackers, saying there were four.

The statement could not be independently verified by The Associated Press, though it resembled previous claims made by the group.

Taufik Andri, a terrorist analyst, said although the attack ended swiftly and badly for the attackers, their aim was to show their presence and ability.

“Their main aim was just to give impression that ISIS’ supporters here are able to do what was done in Paris. It was just a Paris-inspired attack without being well-prepared,” he told The Associated Press. Those attacks in November killed 130 people.