Case of P1-B cut on RH funds may reach SC 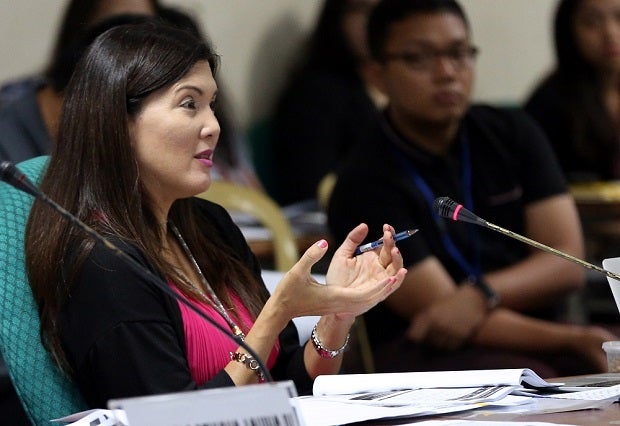 Describing the P1-billion cut from funds meant for family planning supplies as “deceptive,” “unethical” and “unacceptable,” Sen. Pia Cayetano on Thursday said she was studying the option of taking up the issue with the Supreme Court, “specifically looking at how the significant alterations in the budget would affect the legality of the law.”

Cayetano was referring to the Responsible Parenthood and Reproductive Health Act of 2012, which she coauthored, that the government has been funding for the past two years.

“I don’t want to [go to the Supreme Court]—[it is] burdened with so many important cases. But I cannot tolerate this kind of action within a government body that I am aligned with,” said the senator, of the funds chopped off from the Department of Health (DOH) budget meant for the purchase of condoms, intrauterine devices, and birth control pills.

“My objective in doing this is to alert my colleagues that in the future, this should not happen. It’s unethical and unacceptable,” Cayetano said.

“This is not [only] a family planning issue; it is an issue of procedures… ethics… [and] how we conduct business in Congress,”  she added.

The senator said that slashing the budget of the reproductive health (RH) program would affect not only the 10 million impoverished women who stand to benefit from the government’s reproductive health program, but also the DOH program aimed at preventing HIV infections in the country.

Condoms have been widely used as protection against the virus that causes HIV/AIDS often transmitted through sexual contact.

In response to Cayetano’s bid to elevate the issue to the high court, Sen. Loren Legarda, chair of the Senate finance committee, said “it [was] the prerogative of any person to go to the Supreme Court,” but that she “cannot conceive of any cause of action in this matter.”

Amnesty International Philippines (AIP) decried the P1-billion cut in the RH budget as a human rights violation by acts of omission.

In a statement, AIP chair Ritz Lee Santos said “sexual and reproductive health and rights are… enshrined in the Universal Declaration of Human Rights… and require positive action from the government.”

The RH law, Santos said, “can go a long way to improve the protection of women’s human right to sexual, reproductive and maternal healthcare.”

“[But] this budget cut is a step backward,” the AIP official said, as it “defeats the purpose of a social legislation aimed at improving the situation of its beneficiaries. This recent change is not only antiwomen; it is antipoor [and] detrimental to the promotion and protection of human rights especially of the marginalized.”

In a news conference on Thursday, Cayetano slammed Legarda for the budget cut and challenged her and others responsible for slashing the RH budget to explain their action instead of “covering it up.”

“The issue is that you took it out without explaining it to us and even covering it up… There was no intention to disclose that information,” the senator said, adding that she held Legarda accountable for the “damage” and “deception.”

Cayetano had earlier decried that senators were not properly informed of the P1-billion cut in the DOH Family Health and Responsible Parenting (FHRP) program.

Instead, she said, the bicameral conference report on the then proposed 2016 national budget only indicated a P1-billion cut on the purchase and allocation of “drugs, medicines and vaccines.”

It was while the Senate and the House of Representatives were reconciling their respective versions of the budget in the bicameral conference committee that the P1 billion meant for contraceptives was cut out from the DOH budget, and allocated instead for the purchase of air assets for the military and to increase the budget of state colleges and universities.

The cut was only specified in the newly signed 2016 national budget, with the FHRP allocation indicated at P2.275 billion, or P1 billion less than the P3.275 billion approved in the House version.

Cayetano said Legarda should have informed the senators that “significant changes” had been made following the conclusion of the bicam meeting on the 2016 budget.

With only nine session days left before it goes on a three-month break for the election campaign, Congress will find it difficult to pass a supplemental budget to make up for the budget cut, Cayetano said.

The “best solution,” she added, was for the executive branch “supportive of the RH law” to help restore the DOH budget for the FHRP.

Health Secretary Janette Garin, who was “proactive on RH” could also find a way to cover the costs for the RH program, Cayetano said, though she added that she does not want to be in the Health official’s position of having to decide where to make cuts in the DOH budget to make up for the loss of the P1-B RH fund.

Legarda had said that the DOH used only 29 percent of its budget, and could still use the remaining 71 percent to augment deficient resources.

But Garin countered in a media interview that the remaining funds had already been allocated for other DOH programs.

In a text message, Legarda reiterated that the entire budgetary process was done in the “most transparent and inclusive manner.’

The cuts, she added, were made to give additional funds to other programs that needed them.  Among the programs and entities given additional funding were the social pension of indigent senior citizens (P1.2 billion); state universities and colleges (P2.7 billion), and P4.773 billion for the first time payment of total administrative disability (TAD) pension for surviving spouses of deceased World War II veterans, as well as the partial payment of TAD pension for living post-World War II veterans.

The P1-billion cut was “not a unilateral act on my part but [that of] the bicameral committee with the respective technical staff,” Legarda said, adding that the Senate finance committee “discharged its duty to enact the national budget according to the law.”