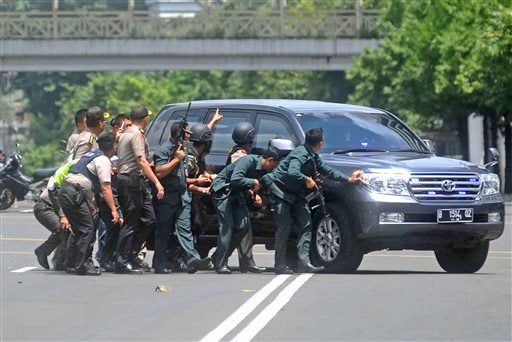 Police officers take cover behind a vehicle during a gun battle with attackers near the site where an explosion went off in Jakarta, Indonesia Thursday, Jan. 14, 2016. Attackers set off explosions at a Starbucks cafe in a bustling shopping area in Indonesia’s capital and waged gunbattles with police Thursday, leaving bodies in the streets as office workers watched in terror from high-rise windows. (AP Photo)

He says security has been increased at public places such as shopping malls and tourists spots, “while extra precautionary actions will be implemented in border areas to prevent possible infiltration by terrorist elements.”

Malaysian authorities have detained more than 150 suspects linked to the Islamic State group over the past two years, including some who were allegedly plotting attacks in strategic areas of Kuala Lumpur. Last September, the U.S. Embassy warned of a potential terrorist threat at a popular hawker street and surrounding areas in the city.