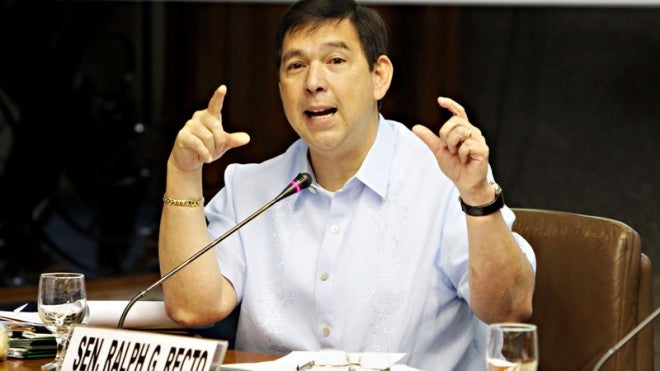 Instead of the proposed P2,000 across-the-board increase for SSS pensioners, President Benigno Aquino III may consider cutting it by half if he finds the amount too high, Senate President Pro-Tempore Ralph Recto said on Thursday.

Recto, one of those who approved the bill granting a P2,000 hike for SSS pensioners, made the suggestion after the President vetoed the measure.

“I suggest the President take executive action. The SSS law allows him to do so. For the sake of the pensioners, it should not be a choice between meron o wala. There should be a compromise amount which can be effected through executive action,” the senator said in a statement.

“If the President finds the P2,000 per pensioner too high, then my unsolicited advice to him is to recommend an amount which he thinks is suitable and supportable by SSS finances; then convey this to the SSS Board–whose members are his appointees–for possible implementation.”

This increase, he said, could be enforced by an SSS Board resolution.

“Raising pension is not just via the legislative route. It can also be done by the President exerting influence on the SSS. Congress only stepped in with this measure because SSS froze pension amelioration measures,” Recto said.

“It’s about time we increase pensions of SSS pensioners. Congress may override the President’s veto but it will be difficult to get a two-thirds vote,” he added.

“It has to be two-thirds vote of both houses voting separately,” Sotto said in a text message.

Asked if it was possible to override the veto, Sotto said: “I doubt it. Matagal ng panahon na walang override na nangyayari sa ating bansa (It has been a while since an override occurred in the country).”

Like Recto, Senator Sonny Angara also raised the possibility of having a “compromise formula” that would not only allow the increase of the SSS pension but would also address the sustainability issues.

“I surmise there were concerns about the fiscal sustainability of the SSS,” Angara said in a separate statement.

“Going forward, perhaps a compromise formula can be developed which increases pensions but also addresses sustainability issues. At this stage, it may be too late for legislative action but nothing prevents executive action,” he further said. CDG