Indonesian president on blasts: We will not be defeated | Inquirer News

Indonesian president on blasts: We will not be defeated 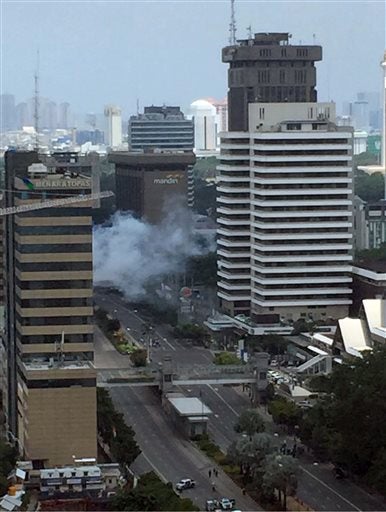 Smoke billows from an explosion in Jakarta, Indonesia, Thursday, Jan. 14, 2016. Suicide bombers exploded themselves in downtown Jakarta on Thursday while gunmen attacked a police post nearby, a witness told The Associated Press. Local television reported more explosions in other parts of the city. (Christian Hubel via AP)

“Our nation and our people should not be afraid, we will not be defeated by these acts of terror, I hope the public stay calm,” he said on TV station MetroTV.

“We all are grieving for the fallen victims of this incident, but we also condemn the act that has disturbed the security and peace and spread terror among our people.”