Aquino: Future of poor hangs on my successor 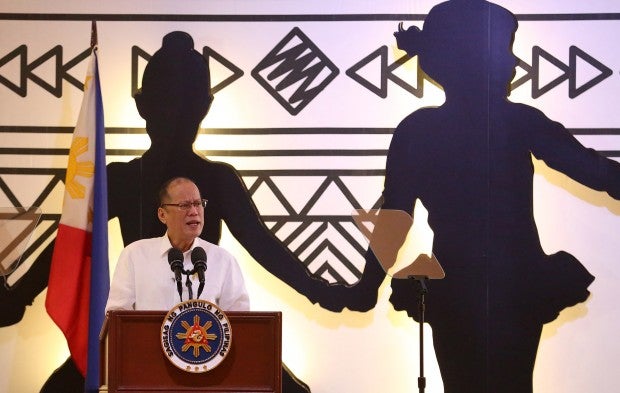 President Benigno S. Aquino III delivers his speech during the Conference on Sustaining the Gains of the Conditional Cash Transfer (CCT) in the Philippines at the Auditorium of the Asian Development Bank (ADB) Headquarters in Ortigas Center, Mandaluyong City on Wednesday. JOAN BONDOC

PRESIDENT Aquino on Wednesday said that the future of millions of Filipinos still relying on the conditional cash transfer program will be in the hands of his successor as he made another pitch for his chosen successor—but without naming Mar Roxas—at a conference to assess the gains of the government poverty alleviation program at the Asian Development Bank.

The ADB, which has long supported the program, is set to approve another $400-million loan to sustain the CCT program.

“It is my deepest hope that, coming into the elections, our people have realized that they can demand for more good governance, and I believe that they will choose the right leader—one who has integrity and experience, who will sustain our gains, and who will definitely put country above self,” the President said in his speech.

“Sustaining, strengthening, and refining the CCT will be left [in] the hands of my successor. That person will be confronted with a very simple question, which I myself faced: Will he help his countrymen help themselves? Or will he choose the counterproductive path, adhere to a policy of sustaining our people’s dependence on those in power, and solely take on the burden of determining everyone’s future? Will he reestablish a system of patronage, and allow our resources to diminish, as the mechanisms of government to feed, clothe, shelter, and provide are used to enhance the politics of personality?” he said.

Mr. Aquino said the next President may even choose to discontinue the CCT, also known as Pantawid Pamilyang Pilipino Program, or 4Ps, and that will leave “the fate of millions of our countrymen in limbo.”

He warned that the Philippines “would definitely lose its hard-earned momentum” if the poverty alleviation program is discontinued.

He said it was obvious to the Filipino people how “daang matuwid”, referring to his “straight path” mantra, is the “correct path, with proven results, towards ending the vicious cycle of poverty.”

The CCT is one of the banner programs of the Aquino administration as the President winds down his six-year term.

Mr. Aquino said the CCT under his predecessor, Gloria Macapagal-Arroyo, was “highly-politicized” so that he had to  reform the program. This included cleaning up the National Household Targeting System, allowing government to identify real eligible households.

Since 2010, the Aquino administration has increased the budget of the CCT program from P10 billion to P62 billion in 2015, raising the number of beneficiaries from some 786,000 poor households to almost 4.4 million poor households and homeless families.

According to the President, 10.18 million children are benefiting from the CCT at present with 1.9 million of them now in high school, leading to a significant decrease in the number of out-of-school youth.

“Some quarters have failed to understand the key principle behind the CCT: its effects are generational. All the beneficiaries now covered by the program, and through them society in general, will only be able to reap the full benefits of government’s support long after I return to private life—which has now become a matter of months,” Mr. Aquino said.

Read Next
Binay camp hits Trillanes move to revive graft probe
EDITORS' PICK
Duterte: When I said I will fight drugs in 6 months, I thought it was like in Davao
Connect to PH’s fastest network with new Signature Plan Lite at only P599 per month
Tips for a cheerful life
Duterte warns of possible lockdown if ‘more aggressive’ Delta variant spreads
Hidilyn Diaz wins weightlifting gold in Tokyo Olympics
Harnessing technology for quality education
MOST READ
Hidilyn Diaz wins weightlifting gold in Tokyo Olympics
Go to war with China over West PH Sea? It will be a ‘massacre’, says Duterte
Hidilyn shoots not only for gold but also for permanent place in PH sports history
Duterte acclaims Sotto: ‘He can become a good vice president’
Don't miss out on the latest news and information.