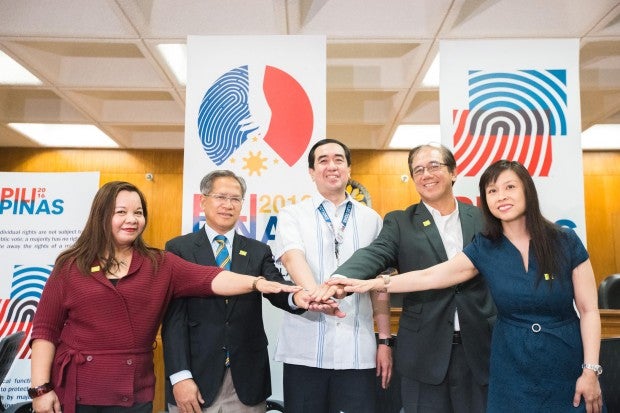 ALL HANDS ON DECK Commission on Elections Chair Andres Bautista (center) joins hands with representatives of several media outlets, including (from left) Philippine Daily Inquirer central desk chief Juliet Labog-Javellana, KBP board chair Herman Basbano, KBP president Ruperto S. Nicdao Jr., and GMA News TV head Nessa Valdellon, to seal a memorandum of agreement signed Wednesday between the poll body and the media. The MOA commits the media to a live and national coverage of three presidential debates and one vice presidential debate the Comelec is organizing as part of voter education. The INQUIRER and its election partner, GMA7, will host the first presidential debate on Feb. 21 in Cagayan de Oro City. JILSON SECKLER TIU

FOR the first presidential debate hosted by the Inquirer and its election partner, GMA 7, candidates running for the country’s top political post are expected to present their platforms on such pressing issues as peace and order, poverty reduction, agriculture and Charter change.

The first of a series of debates organized by the Commission on Elections (Comelec) will be held in Mindanao at Capitol University in Cagayan de Oro City on Feb. 21, from 5 p.m. to

7 p.m., Comelec Chair Andres Bautista announced during the signing of a memorandum of agreement (MOA) between the election body and several media outfits Wednesday.

Dubbed “PiliPinas Debates 2016,” the four debates to be held in selected universities will be produced and broadcast live by participating networks and their print partners.

The Comelec “will be inviting all candidates for President and Vice President,” but is not forcing them to attend the debates,  Bautista said.

“We just think that not showing up is already a message in itself,” the Comelec chief said, adding however that there will still be a vacant seat with the name of the absent candidate during the debates.

“(But) this is not to shame them. We don’t shame anybody,” Bautista said.

“(The candidates) are free to attend or not, but (if they don’t), they miss out (on) a great opportunity to speak to the Filipino people because the debates will be telecast all over the country,” he added.

Though the poll body had yet to formally communicate with the candidates, Bautista said he had been reading newspapers and (learned) that “some of them say this is a welcome development.”

The poll body already has a draft of the debate rules and regulations, the poll chief added.

According to Bautista, the Visayas leg of the presidential debates to be hosted by TV5 and Philippine Star, will be held in Cebu province on March 20. It will center on such topics as disaster preparedness, climate change, healthcare, education and fighting corruption.

The Manila Bulletin and ABS-CBN will host the third presidential debate on April 24, either in Central or Southern Luzon. Issues to be discussed include traffic and public transportation, electoral and political reforms, foreign policy, tax reform and national defense.

The vice presidential debate has been set on March 10, with the Metro Manila venue still to be decided.

“We want to assist voters in making an informed choice (with respect to) their candidates, while encouraging candidates to focus on substantive issues and public policy pronouncements,” said Bautista of the series of national debates, the first organized by the Comelec since the 1992 presidential elections.

Juliet Labog-Javellana, Inquirer Central Desk chief who signed the MOA for the Inquirer, said the paper supported the Comelec debates as a venue for voters to scrutinize the candidates so they can make enlightened choices in the May 9 national elections.

“This is an opportunity for an intelligent discourse on the qualifications and platforms of the candidates,” Javellana said.

According to the MOA, the national debates would enable the Comelec to implement its objective of educating Filipino voters, while serving as a “tool for exacting accountability among candidates.”