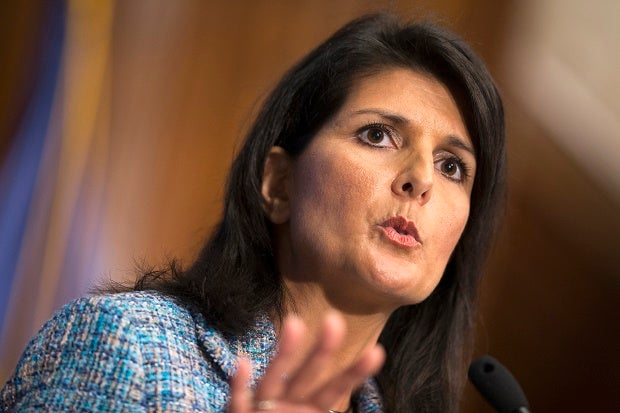 In this photo taken Sept. 2, 2015, South Carolina Gov. Nikki Haley speaks at the National Press Club in Washington. Haley will give the Republican response to President Barack Obama’s Jan. 12 State of the Union address. AP Photo

WASHINGTON, United States—South Carolina Governor Nikki Haley, who will deliver the Republican response to the president’s State of the Union address Tuesday, will jab her party’s White House frontrunner Donald Trump by warning against the “angriest voices” on immigration.

READ: Obama tells US to embrace time of ‘extraordinary change’

Haley, the daughter of Indian immigrants and a politician seen as a potential vice presidential pick in 2016, will criticize President Barack Obama’s policies as having “fallen short of his soaring words” during his seven years at the helm.

According to excerpts released shortly before Obama addresses Congress, Haley will attack his health care plan and the weak state of the economy, and how his timid leadership has fueled what she will call the “most dangerous terrorist threat” the United States has faced since September 11, 2001.

But she will also point the finger toward leaders—typically Republican—who are whipping up anti-immigrant sentiment, and while she does not mention the celebrity billionaire Trump by name, her reference is clear.

“I am the proud daughter of Indian immigrants who reminded my brothers, my sister and me every day how blessed we were to live in this country,” she will say, according to the excerpts.

“Immigrants have been coming to our shores for generations to live the dream that is America,” she will add.

“During anxious times, it can be tempting to follow the siren call of the angriest voices,” she is to say.

“We must resist that temptation. No one who is willing to work hard, abide by our laws, and love our traditions should ever feel unwelcome in this country.”

The remarks may be seen as an effort by Republicans to tamp down the xenophobia that has emerged in some American quarters in recent months, particularly with the soaring success of the Trump presidential campaign.

Trump ignited a global firestorm when he called for a ban on Muslims entering the United States in the wake of the deadly Paris attacks, in which some of the killers are believed to have slipped into France as refugees.

Last weekend, a Muslim woman was kicked out of a Trump campaign rally after staging a silent protest.

He has made derogatory comments about women, and has called some Mexican immigrants “rapists” and pledged to build a large wall on the US southern border if he is elected.

The first votes in the race for the Republican and Democratic presidential nominations take place February 1 in the state of Iowa.