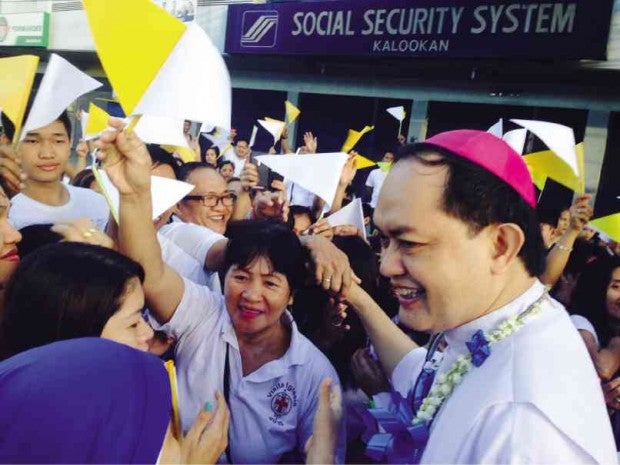 BISHOP Pablo Virgilio David heads the Diocese of Kalookan where 40 percent of 2.5 million people in the cities of Caloocan, Malabon and Navotas are poor. TONETTE OREJAS

Shortly before he was installed as the new bishop of Diocese of Kalookan, Pampanga province, Auxiliary Bishop Pablo Virgilio David was amused by an unusual question from Manila Archbishop Luis Antonio Cardinal Tagle.

Wishing to assure the archbishop of Manila of his full obedience, the Jesuit-educated David replied: “I gave a sweet yes to Pope Francis.”

“I’ll go even to Timbuktu,” he added.

David shared the anecdote in his homily after his installation as the bishop overseeing the cities of Caloocan, Malabon and Navotas in Metro Manila.

This exchange took place before they joined bishops in a procession to the altar of San Roque Parish in Caloocan City on Jan. 2, drawing laughter and a long round of applause from parishioners.

It’s also a wish fulfilled for Antipolo Bishop Francisco de Leon who, as administrator of the diocese, prayed daily for someone to fit the shoes of Bishop Deogracias Iñiguez Jr., who retired in 2003.

Around 40 percent of 2.5 million residents in the three cities are poor, Iñiguez told the Inquirer after the rites.

David’s new assignment did not draw any protest from the devout Catholics in Pampanga province.

“They’ll be in for lots of work because he really involves the laity a lot in parish and community undertakings,” Roman said. Her group is a nongovernment organization affiliated with the Holy Rosary Parish where the bishop had been posted since 2008.

In Pampanga, David is known to have excelled as a Bible scholar, formator of the clergy, spiritual director of seminarians, enabler of parish pastoral councils, church heritage advocate, friend of youth, and an activist for the poor and the environment.

The Shrine of the Apu Mamacalulu in Angeles City attests to his abilities to resolve conflicts and to turn decrepit churches into architectural wonders that magnify God.

He did these on top of his duties at the Catholic Bishops’ Conference of the Philippines and a weekly Sunday Gospel show that is viewed on more than 200 cable television channels in the country and overseas.

He was forthright with elected leaders. “The interest of the majority, especially those who are neglected, shall be my priority. It is not enough that we coordinate. We need to help one another,” he said.

Overwhelmed by the attention, he reminded the laity that “Christ is the sole and reigning pastor” and that he was just a “servant” who abides by the spirit of kenosis (“self-emptying of one’s will and becoming entirely receptive to God’s divine will”).

“I have no illusion of shepherding the people in the diocese alone,” he said.