Grow your own fishy plant

Like people, plants and fish need water and food to live. And, like people, they produce waste products.

When you combine aquaculture and hydroponics, you can raise both plants and fish at the same time. This system is called aquaponics.

Fish are known to produce large amounts of waste rich in nitrogen. The microbes and worms that live in the gravel will turn the fish waste into nitrite and nitrate nutrients that can fertilize the plants. Plants depend on nutrients, especially when they are grown in anything other than soil.

And what favor do the plants do for the fish? They release the oxygen that the fish breathe and the nutrients that prevent the ammonia in the fish waste from poisoning the water.

Between plant and fish, water is filtered continuously, creating a healthier environment for both species and leaving few pollutants in the environment.

Today you will create a small aquaponics system that you can take home. 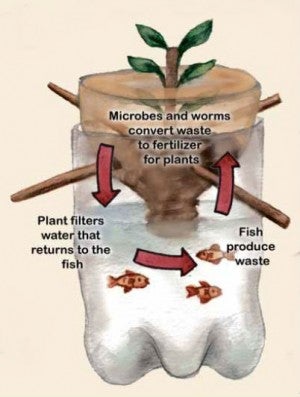 Are you one of those students who are afraid of Science? Do you think there is no fun in learning Science?

In keeping with its mission, “Bayer: Science for a Better Life,” and its enthusiasm for research, Bayer wants to pass on to young people like you the joy in discovery and the excitement in learning. By putting together simple, educational and fun experiments, Bayer encourages elementary school students to learn Science by doing Science.

Through this series of experiments related to health, nutrition and nature, Bayer and Inquirer in Education aim to deepen the interest of elementary pupils in Science.

The materials needed for these experiments are safe and can easily be accessed from your home. 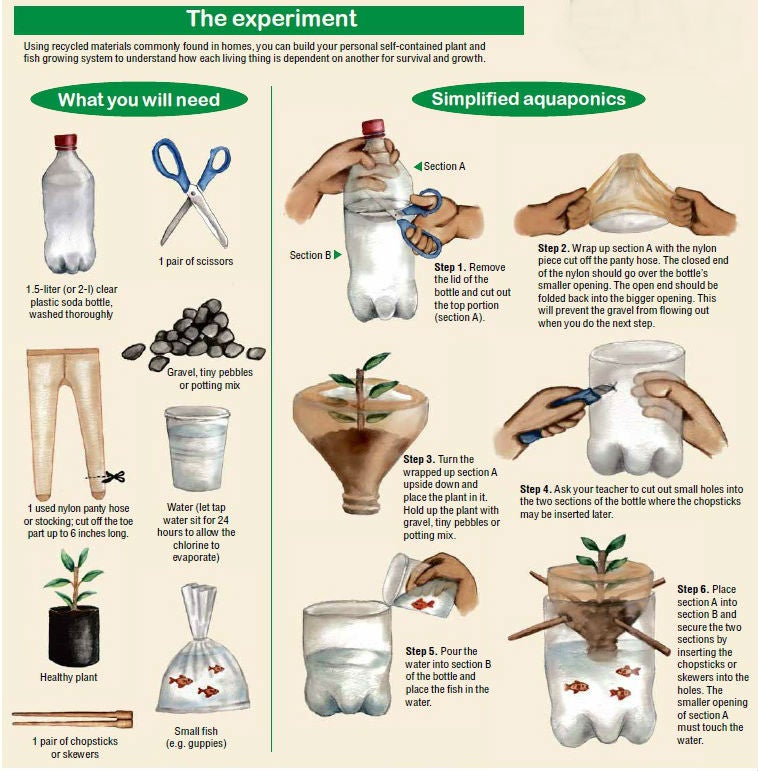 You have just built a mini-ecosystem.

The clear plastic bottle allows light in for both plant and fish. Gravel is used to stabilize the bottle, ground the plant and retain the good bacteria, which turn fish waste into nitrogen-rich fertilizer for the plant.

The plant releases oxygen into the water and filters the ammonia in the fish waste in a process called nitrification, preventing water poisoning. The fish breathes the oxygen from the water through a process called respiration. When it exhales, it releases carbon dioxide, which is then absorbed by the plant. The process of absorbing carbon dioxide and releasing oxygen is called photosynthesis.

This cycle will repeat as the fish is being fed, creating a symbiotic relationship between fish and plant.

Caring for your aquaponics

Keep your aquaponics next to a window so the plant can get natural light. Feed the fish one to two pellets every day. If you forget, do not give double the amount the next day. Overfeeding can kill the fish. Change the water when it gets dirty. Store water from the faucet in a clean pail and let it sit for 24 hours so the chlorine will evaporate. Use this to replace the dirty water.

Look for a news item or photo in the Inquirer that shows waste or garbage. Paste it on a sheet of paper and create a poster for a “zero waste” snack or lunch campaign in your school.

“Zero waste” means you will not use anything that you will have to throw away. Usually, students buy or bring food to school in a plastic or paper bag, or even styrofoam.

In this campaign, you will have to bring food in reusable containers rather than wrapped in disposable packaging. You will pack your drink in a refillable bottle. You will keep your sandwich in a resealable container. This way, unfinished food and drink can be saved for later.

From your classroom, you can expand the “Zero Waste Lunch Campaign” to other classrooms and even the entire school.