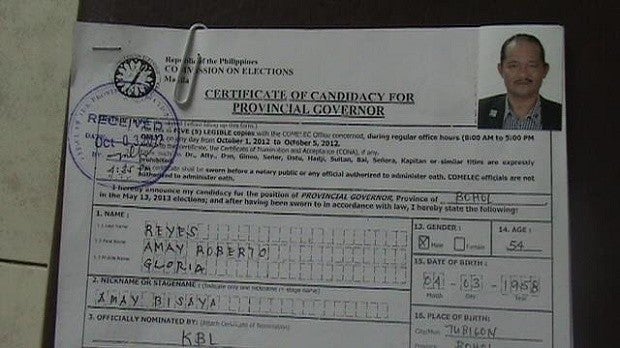 Amay Bisaya’s certificate of candidacy (COC) when he ran for Bohol governor in 2013. FILE

TAGBILARAN CITY, Philippines — The Commission on Elections (Comelec) ordered comedian-actor Roberto Gloria Reyes, popularly known as “Amay Bisaya,” to pay a fine of P25,000 for failing to submit his statement of contributions and expenditures (Soce) during the May 13, 2013 elections.
Reyes, a native of Tubigon town, was among the 27 candidates in Bohol who were fined by the Comelec for failing to file their Soce under Comelec Resolution No. 9476, the rules that governed campaign finance and disclosure in connections with the May 13 elections.
Reyes, 57, ran for Bohol governor in 2013 but lost to Gov. Edgar Chatto.
It was Reyes’ first offense, the report added.
Reyes was known for his sidekick roles in movies like Manila Kingpin: The Asiong Salonga Story, Ang Panday 2, and Sigaw ng Katarungan.
Aside from Reyes, ordered to pay a fine of P20,000 were Alfredo Evalaroza, Santos Abella and Floyd Errol OrdoÑez who ran for board members in 2013.
Comelec also imposed perpetual disqualification to hold public office to Necitas Avito Dumagan, a candidate for mayor in Batuan town in 2010 and councilor in the same town in 2013; Saturnino Marimon who ran for Loon town councilor in 2007 and 2010; Francisco Pechon, Jr. who ran for Loon councilor in 2007 and 2010; and Romulo Dolotina, Sr. for councilor in Sierra-Bullones town in 2007 and 2010.
They failed to submit their Soce for second and third time.